A revisit to the Arnold Palmer Crazy Golf course in Blackpool. 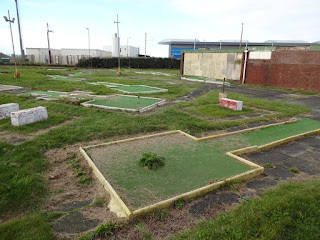 It's always a real shame to find a once thriving Crazy Golf course that has been abandoned. Unfortunately that's exactly what we found on a recent trip to Blackpool.


The Arnold Palmer Putting Course next to the tram terminus at Starr Gate was a great course. Luckily we managed to play it on our visit to the seaside resort in April 2008.


Sadly the course closed earlier this year and all of the obstacles have been removed. Although the bases and borders of the holes remain. 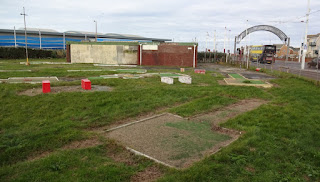 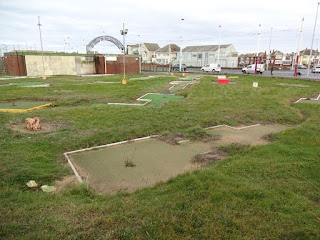 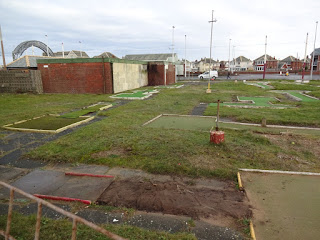 The 18-hole course was the 45th course visited on our Crazy World of Minigolf Tour.


Check out the video, and others in the links below, to see more of the course.

Arnold Palmer Putting Courses are a classic part of the British seaside and it's dreadful to see them either left in this state or worse. Another Arnold Palmer Putting Course to be demolished this year was the layout in Exmouth. We got to visit that course as part of our tour of the south west coast of England in the summer of 2015. Sadly, the two Arnold Palmer courses in Great Yarmouth have also been removed in recent years and been replaced by one Adventure Golf course. While the two courses in Cliftonville, Margate were closed a couple of years ago. The course that was once in Folkestone is no longer playable - as it was used to make an art installation.

There is also a new type of Arnold Palmer Putting Course in Shanklin on the Isle of Wight. Formerly a Beton-style of Miniature Golf, it received a refurbishment a few years ago and is now an oversized version of many of the courses listed above!

Many thanks to our friend Philip Walsh for sending over some great snaps of the old Crazy Golf course at Starr Gate in Blackpool. Philip photographed the course while aboard a tram during a recent tram heritage weekend in the seaside resort.

Check out the blog post 'The old Crazy Golf course at Starr Gate in Blackpool' for more information.