The World Minigolf Sport Federation has updated the World Rankings and Emily and I are ranked in the General Class (Adult) lists for elite tournament players.

Great Britain is ranked 13th of 30 countries in the Nations rankings. Fourteen GB players (13 men and one woman) contributed to the ranking.

The World Minigolf Sport Federation is the umbrella organisation of 62 Minigolf sports associations worldwide with continental associations in Africa, America, Asia, Europe and Oceania. There are more than 38,000 competitive minigolf players registered with the WMF via the 62 member nations, with 900-plus clubs between them. Over 1,000 courses are approved for official competitions and over 1,500 minigolf tournaments are held each year.

The WMF is gaining further recognition on the global stage all the time. As a member of SportAccord and an organisation called AIMS (the Alliance of Independent Members of SportAccord) the WMF's next goal is to achieve International Olympic Committee recognition.

Apart from the March 2011 list Emily and I have been in the sport's international rankings since November 2008 following our debut for the Great Britain team at that year's Nations Cup championships in Tampere, Finland. 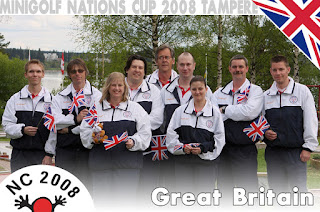 The Great Britain Minigolf Sport Team is sponsored by UrbanCrazy, suppliers of permanent and portable mini and crazy golf courses.