Crazy Golf at The Grove Park in Carshalton

A visit to the Crazy Golf course in The Grove Park in Carshalton. 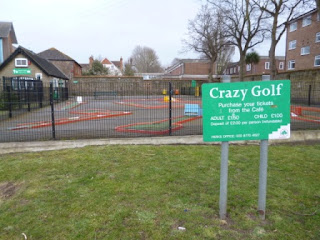 After a packed day of Minigolf with our fellow Minigolf Pro Players in Beckenham and Croydon Emily and I headed towards Guildford for an evening playing the new sport of Archery Tag.

Taking a leisurely drive towards Guildford we found ourselves driving through the pleasant surroundings of Carshalton and I remembered there was a Miniature Golf course in the town that we had not yet visited on our Crazy World of Minigolf Tour!

I had an inkling that the Minigolf course was in Carshalton Park, so we headed there first. Upon arriving at the park we found it wasn't there, but instead it's at The Grove Park in the very centre of Carshalton.

We parked up and went to find the course which was discovered to be a 9-hole Crazy Golf of the fibreglass variety. Unfortunately it wasn't open, nor had it been for a while by the look of it. We guessed that the extended spell of inclement weather had meant the course was not yet ready for the summer season. 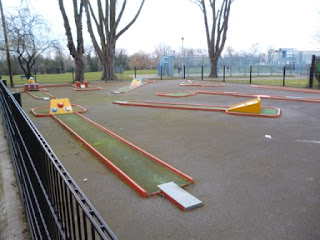 Our visit to the course was number 527 on the Crazy World of Minigolf Tour since September 2006! 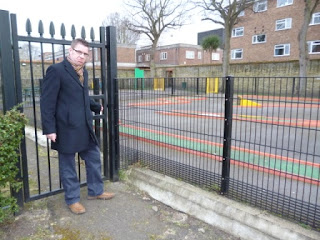 The course was laid out on a flat surface, which for this type of course is a very good thing. We've found that they play quite poorly when placed on gravel or grass. The best type of this course variety we played was at Conyngham Hall Gardens in Knaresborough, North Yorkshire. We also found a very interesting variety of this course at Bainland Country Park in Woodhall Spa, Lincolnshire!

After finding the Crazy Golf course in the park we then went for a pleasant stroll around Carshalton. A very nice spot and a place we'll re-visit on a sunnier day in the future.