A trip to six pubs and a hotel in search of somewhat elusive Bar Billiards tables.

While in London on Tuesday 20th March I had a hunt around for some more Bar Billiards tables to have a play on.

With the regular minigolf season still a month away my thirst for playing a game that requires the holing of balls and dodging obstacles on a green surface needed to be stated, so using the Bar Billiards table map and lists from the All England Bar Billiards' Association (AEBBA) website and the British Bar Billiards Forum I set off to see what I could find.

The first two pubs visited drew a blank. The barman at The Trafalgar pub on the King’s Road in Chelsea had heard of the game (once I said it ‘was a bit like Pool’). The table was long gone, but some of his regulars still mentioned it.

The next pub visit was to The Surprise on Christchurch Terrace in Chelsea. To not much surprise from me the table there was also long gone. Both The Trafalgar and The Surprise looked nice enough, but were more gastropubs than pubby pubs!

The next location on my list was The Gallery Hotel and the fact that it was a hotel, rather than a pub, left me doubting whether there would be any hint of Bar Billiards. My concerns were unfounded as the Receptionist knew that there was a Bar Billiards table in the hotel, but had never been asked about it before, especially not from someone coming in off the street. But, having explained how I’d heard about it she called the Butler to take me to ‘The Morris Room’ to have a look.

Down the stairs in the nicely decorated hotel – the lobby has a nice bar, early 20th century photographic equipment and a chess board set-up amongst the leather chairs and bookcases – I was led to the Bar Billiards table and left to have a play on it. 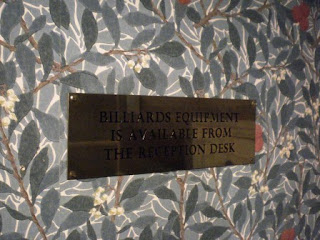 The felt on the table looked a different colour to that on the other tables I’ve played to date and it had a very fast running baize too. The table is neatly tucked away in an alcove under the stairs. There were two cues, a rules sheet (which marked the establishment of the rules in 1934), chalk, a scoreboard, but sadly only four white balls to use!?

The three-pin table was free to play, the timer did work, but the bar did not drop. Interestingly, the coin slot was pre-decimal, so I have no idea how much it would have cost to play ‘back in the day’!?

I had an irregular match against myself (I lost, but won 200 points to 30 points) and then had a bit of a practice. A nice old table in a lovely hotel. Definitely worth a visit if you’re into Bar Billiards.

After the high of playing the table at The Gallery Hotel, my next stop was fruitless as I found that The Gloucester Arms on Gloucester Road no longer has a table either.

After passing by the Pavilion at Hyde Park (home to a 9-hole Miniature Golf Putting Course) I caught the tube to Temple and The Cheshire Cheese pub. And I am certainly glad I did.

The blackboard outside the pub proudly announces the pub’s Games Room, which is home to all manner of great activities including Bar Billiards, Darts, Rings, Giant Jenga, Chess, Backgammon, Shove Halfpenny, Poker and more!

After ordering my drink I enquired about the Games Room and the barmaid opened up the basement room for me, where I was greeted by a Bar Billiards table, quality dartboard (with electronic scoreboard) and Rings game board.

While waiting for Emily to arrive I had a practice of my ‘arrers and threw a few Rings, to little effect.

Once Emily arrived we decided on the format for our mini-Publympics competition – best-of-three games, starting with Bar Billiards, followed by the Ring Toss and ending with a one-leg 301 straight-in, double-out game of Darts.

The Bar Billiards table had four Mushrooms (two white, one red and a black). However, we decided to play the game as a three-pin match instead. In game one I defeated Emily 400-250. Emily had totted up a score of 230 points and a 140-break, before wiping out by hitting the black mushroom.

Next up was a game of Rings. Without knowing the exact rules and with no rule sheet available we played an arbitrary game of six-rings-each, highest score wins. In game one I scored a pitiful 6 points to Emily’s 25. Emily also won game two with a 13-10 points victory to take the second game in our series too. I wrapped up our game of Rings by winning the third, and unnecessary, final game 13-11. Emily’s total points haul was 49 to my 29.

In the sudden-death leg of Darts I won the match in a 66 dart-leg(!) to win the overall three game challenge contest 2-1.

The Cheshire Cheese is a great pub. Nice and friendly and with the whole basement given over to pub games and a bar it’s well worth a visit.

Our next stops on the Barmy Bar Billiards Trail led us to Soho and two pubs on Brewer Street. The first, The Glasshouse Stores, had a blackboard on the street detailing the pub games, while the other, Marks Bar at Hix, shows the Bar Billiards table in the photos on the menu outside.

We decided to visit The Glasshouse Stores and found the Bar Billiards table towards the back of the pub. The pub is quite large and there is a cellar bar too. We asked about playing the Bar Billiards and were told a £5 refundable deposit was required for the cues, chalk and Mushrooms. We were also told the timer was broken so we’d have to pay a pound to play at the bar too.

We set-up the three-pin table and found there were quite a lot of extra balls on the table (a total of twelve available), perhaps they can sell The Gallery Hotel four more! We removed the excess balls and decided we’d play to a 15-minute time limit before the imaginary bar would drop.

In game one I got off to a good start, racking up a break of 510 points, before wiping-out by hitting both white pegs. I still managed to pick up the win, with a score of 430-nil, cleaning up the last three balls on the table with my final shot scoring 10, 50 & 50. Towards the end of the first game Emily had also been unfortunate to wipe-out a break of 510 points!

The second of our three games saw me once again pick up a victory, this time the match went to a dreaded shoot-out on the black peg, which I managed to avoid and holed out with my first attempt to take the win 550-nil.

After a bit of practice we decided to have one final challenge match which I won 360-10 after potting the white in the 200-hole on my first attempt again, this time after Emily had missed her first shot at it.

The pub also has a number of other games available to play including a wide selection of board games, along with a good dartboard area too.

After playing plenty of Bar Billiards for one day we called it quits and headed home. But we will be back to play the table at Hix, and a few others in London, another day.

That "Lucky 7's" game was brilliant...definately one to look for!

I forgot the aim of Bar Billiards was not to knock down the mushrooms :) I thinking I should have been given extra points for "upturning" one of them :)