Appearing on ITV's The Chase!

‘Today’ I faced one of the finest quiz brains in the UK as I appeared on hit ITV quiz show ‘The Chase’!
The programme sees four strangers teaming up to take on a Chaser in a general knowledge quiz, firstly as individuals and then, if they qualify, in the Final Chase.

On the show, filmed last year, I was up against quiz supremo Mark Labbett and in the Cash-Builder round only managed to answer one question correctly out of nine in one minute of quick fire questions. I was like a deer caught in the headlights!

In the head-to-head chase itself I was offered either a measly £4 to take a step closer to safety, or £20,000 to take a riskier step forward. After a chat with my team mates I opted to play for the £1,000 and managed to answer three questions out of seven before being caught two steps from home. It must have been the pressure of appearing in front of a ‘studio audience’.

The four questions (out of 16) that I answered correctly were:
- What food-related nickname is given to the Yeoman Warders of the Tower of London
o Answer: Beefeaters
- In punctuation, which character is also known as an ‘interrogation point’?
o Answer: C) Question Mark
- What name is given to the narrow, cobbled street in York’s city centre?
o Answer: C) The Shambles
- Which actress played the leader of the Pink Ladies in the film ‘Grease 2’?
o Answer: C) Michelle Pfeiffer
The Chaser and I both got the question “What is a bluebonnet?” wrong. It’s a Plant, not a Fungus.
Another team mate, Alison, was also eliminated from the game which left two players, Anne and Glyn, to play for £10,000. They took on the Chaser with an 18 step head start after correctly answering 16 questions, plus their ‘bonus’ two step head start.
The Chase is hosted by comic and actor Bradley Walsh and is now in its fifth series. Thousands of people apply to appear on the show each year. I was on number 39 of a series that will be over 100 shows long.
For the next month you can still catch the show on the ITV Player online. 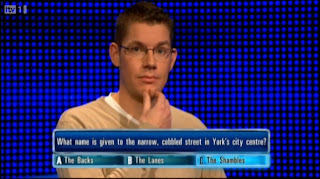 In 2009 I also appeared on BBC2’s quiz show Eggheads, when I led a team of Minigolfers known as the ‘Nutters with Putters’. Our team played for £18,000 but unfortunately lost in the final head-to-head game.
Of the two shows I found The Chase to be much tougher as you’re really put on the spot with the quick fire questions.
Who knows what show I’ll go on next – Climbing for Dollars perhaps... and with TV quiz shows getting repeated over the years maybe I'll win in a re-run!
Links:
- ITV
- ITV – The Chase
- The Chase on Wikipedia
- Eggheads Blog Posts
Posted by Richard Gottfried at Friday, March 02, 2012

It brightened up our teatime Richard. And to think I'd been going to invite you to apply for Pointless with me. :)

After the audition for The Chase in Cambridge last year!

Great attempt.. another moment in history :)

There is a story about my appearance on The Chase on p.36 of the Herald & Post newspaper this week - "Richard is chasing a quiz-show dream"

You can view it online here.

It's possible my episode of The Chase will be on Pick at 5pm next Saturday, 28th December.

That's if the episode number hasn't been changed again.

The episode scheduled is listed as Series 5, Episode 16.

My episode has been listed as that before. As well as Series 5, Episode 39.