Luton Minigolfer Richard Gottfried was a runner-up in two minigolf tournaments over the weekend as he competed in Staines, Surrey and Weymouth, Dorset.

First up was the two-round London Open competition held at the 18-hole Adventure Golf course at Lammas Park in Staines on Saturday 10th October. 22 players competed for the title, but it was Cambridge’s Adam Kelly who won with a score of 73 (+1). The battle for second place came down to a four-player play-off which Richard won at the third extra-hole, defeating the 2006 London Open winner David Corkett, Jon Angel and Alan Norman. In the tournament Richard had scored rounds of 40 (+4) and 38 (+2) for a 78 (+6) total. 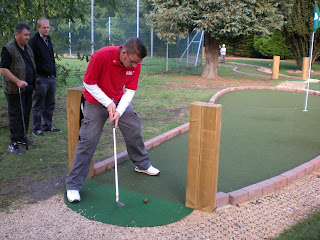 Richard putting on the second hole during the second/third place play-off in Staines. 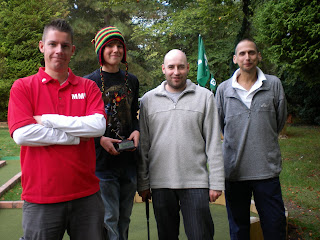 On Sunday 11th October Richard competed in another 22 player field in the Weymouth Open tournament held at the 18-hole Pirate Adventure Golf course at the Sealife Centre at Lodmoor Country Park. Last year Richard won the Weymouth Open, and after the two rounds of play this year was tied for first place after scoring a 46 (+10) and a 41 (+5). However, in the sudden-death play-off Richard lost to Bath’s Kevin Moseley at the fourth extra-hole as he took a three to Kevin’s two. As a consolation his round of 41 set a new British Minigolf Association official course record which earns him 50 ranking points in the BMGA Order of Merit. 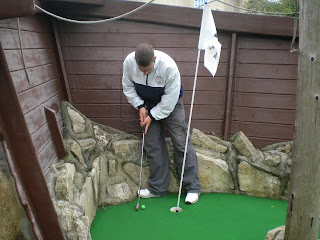 Richard putting 'onboard' the Pirate Ship third hole in Weymouth. 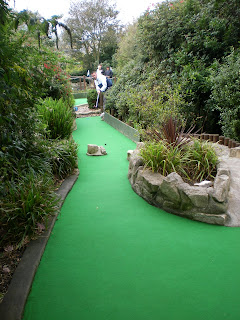 A long tee-shot on the fifth hole at Weymouth.

Richard said “It was a great weekend of minigolf and very interesting playing two events on different courses so far apart. I was very happy to have won the play-off to win second place in Staines on Saturday, but was sad to lose the play-off and my title to Kevin in Weymouth on Sunday. Overall though I was incredibly pleased with my play this weekend and am looking forward to the last events of this season and hopefully I will be in with a shot at the World title in Hastings in a few weeks.”