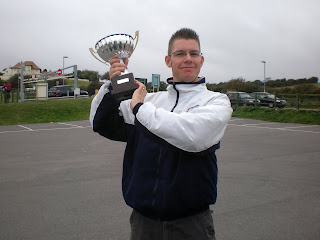 The competition was played using a two-round mixed strokeplay and matchplay format and Richard won the Cup after making the cut in the 9-hole qualifying round, and then defeating Paul Johnson one-up in the 9-hole matchplay final. Emily Gottfried and Peter Jones were tied for third place.

Richard won the Scrap Iron Cup the previous week in the first edition of the tournament held at Sandbanks Crazy Golf Course. 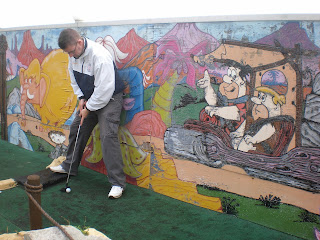 Rules of the Johnson's Scrap Iron Cup
Played between members of the Midlands Minigolf Club
Played in groups of two in round one
Groups are drawn at random using the 'balls in a hat' technique
Round one is a strokeplay match played over 9, 12 or 18 holes
The two players with the top scores after round one qualify for the second round/final
Round two is a matchplay match played over 9, 12 or 18 holes
The winner of the matchplay match becomes the Scrap Iron Cup* Champion**
* The Scrap Iron Cup (aka the 'NABBA ENGLAND 95 CLASS TWO WINNER' Trophy) remains the property of Owen and Paul Johnson
** The Reigning Scrap Iron Champion retains the cup until the next defence whereupon it is given up until the next Scrap Iron Cup tournament has been completed
Posted by Richard Gottfried at Tuesday, October 13, 2009