First up on Saturday 3rd October was the intra-team Scrap Iron Cup competition played between members of the Midlands Minigolf Club and using a two-round mixed strokeplay and matchplay format. Richard won the Cup after making the cut with a score of 27(+3) to tie with Paul Johnson in the 12-hole qualifying round, and then defeating Paul one-up in the 12-hole matchplay final.

In the BMGA British Club Championships on Sunday 4th October Richard and his three team-mates were not so fortunate and ended the tournament in seventh place of eight teams in the matchplay tournament. Last year in Stratford-upon-Avon Richard was a member of the winning team that went undefeated, but this year the Midland A Team, with Richard as Captain, could only manage two wins, a draw and four losses from their seven matches.

Richard and his team defeated Planet Hastings Crazy Golf Club A Team 2&1 in their first match, and went on to beat the Sandbanks Team 3&2. Their draw came against the Kent Minigolf Club, while they suffered defeats to the Midlands B Team, Planet Hastings B Team and the eventual winners from the London Minigolf Club.

Richard said “It’s disappointing not to be able to retain the British Club Championships title, but all credit to the London Team and also to our B Team that played really well and gave us a beating. From an individual point of view I am very pleased to have come out on top in the Club’s Scrap Iron Cup. It was a close run tournament with Paul Johnson pushing all the way until I won it at the last hole.” 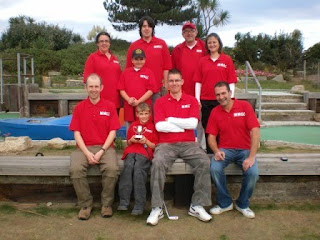