Luton Minigolfers Richard & Emily Gottfried represented England for the third time since their debut in 2007 as they competed in the seventh annual Castle Golf World Crazy Golf Championships at the Sea Front Adventure Golf Complex in Hastings on Saturday 24th and Sunday 25th October. 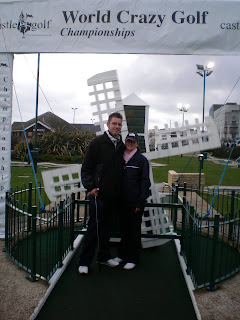 For the second consecutive year Richard made the ‘cut’ to qualify for the final round to finish in 17th place of 83 competitors. Richard also finished 17th (of 68) in 2008, though he improved on his total by four shots in the expanded field of players. Emily finished in 45th place (down two places from 43rd in 2008), and was also the fifth ranked player (of twelve) in the Women’s World Crazy Golf Championships that was played in parallel with the main tournament.

The competitors played six qualifying rounds (four on Saturday, two on Sunday) on two 18-hole courses, with the top ranked 18 players making the cut to take part in the final round. The overall winner was Keith Kellard from Bishop’s Stortford. Second was Brighton’s Peter Emmerson, with John Mittler from Finland in third place. Kellard won with a seven round total of 247 (-5), an average of 1.96 shots per hole, and five shots clear of the field.

Richard’s seven round total was 264 (+12), an average of 2.09 shots per hole, after rounds of 35, 40, 35, 41, 37, 37 and 39. He said “It was a great weekend of Crazy Golf and I am pleased to say that I didn’t have a single bad round. Last year I had a nightmare in my fifth round, but I’ve learned from my mistakes. I also enjoyed the Miniaturegolfer.com competition on the Friday and it was great to get third place there.” 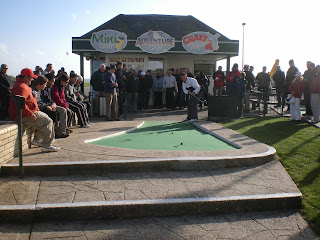 Prior to the main event Richard was invited to compete in the “www.miniaturegolfer.com 'Nine Best' Crazy Golf Championship” to celebrate the ninth year of the Miniaturegolfer.com website. The competition was held on Friday 23rd October and took place over the nine hardest holes at the Sea Front minigolf complex. In the field of 12 players Richard finished in tied third place with Kent’s Sean Homer, both on one-over par. Peter Emmerson was the winner on two-under par, with Anthony Pope second on one-under par.