I'm actually quite happy about this purchase.

Emily recently spotted a range of retro and parody t-shirts by Manchester Tom on Instagram and I knew I had to buy this Unhappy Shopper one! 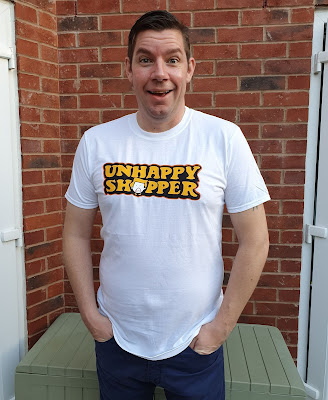 Even though 2020 has been undeniably shite and I've barely been to any shops I wanted to go to, I have managed to find a few Happy Shopper shops with the nice old branding still in place.
One of the stores in Sheffield even had the 1971 logo on its social distancing signage! 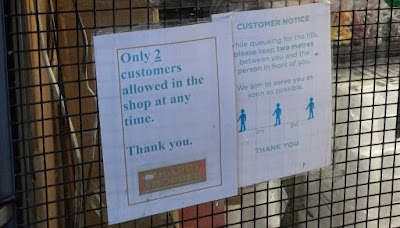 Check out the Manchester Tom website for more information.

Posted by Richard Gottfried at Friday, November 06, 2020 No comments:

I recently received a nice surprise in the post - some great merchandise and ephemera from my fellow minigolf bloggers at A Couple of Putts!


This year Robin Schwartzman, one half of the A Couple of Putts team, has been the Hub-Bub Artist-in-Residence and created a brilliant looking and free to play miniature golf course called Sparkle City Mini Putt in downtown Spartanburg in South Carolina, USA.


Sparkle City Mini Putt sounds like a marvelous idea. Hopefully one day we'll get to play the layout on our Crazy World of Minigolf Tour.


Visit the A Couple of Putts blog to follow the travels of Tom Loftus (aka Mr. Tee) and Robin Schwartzman (aka The Pink Putter) on their minigolf travels.

Check out the links below for more details on the 9-hole minigolf course. To play the course you can take along your own putter and ball, or call in at one of five local business where you can borrow some equipment for free.

Emily's photo of a 'spectator' at the 2012 Castle Golf World Crazy Golf Championship was selected as one of the winning entries in the recent Birdies Pop Up Golf Crazy Golf photo competition!

The prize for the best photo was a Birdies Pop Up Golf t-shirt. Although it's a bit cold to be wearing them now (unless playing Minigolf indoors)!