A blog post from a wonderful weekend in Wales.


I've just returned from a brilliant weekend away in Wales. Hours and hours of minigolf on some new courses, superb weather and visits to some new seasides added up to a lot of fun.

I arrived in Wales at 10.40am on Saturday morning and my first stop was in Port Talbot town centre for a wander, a bit of charity shop shopping and some lunch. While there I spotted the outdoor market/car boot sale in a car park and was surprised to be able to add to a number of my collections by finding some retro 80's toys, pin badges and amusement park tokens! The weekend got off to a bright start.

After checking in at the excellent Aberavon Beach Hotel on the seafront I went straight to the Pirate Cove Adventure Golf course to practice for the Welsh Mini Golf Club's Doubles Championship.


The 12-hole Pirate Cove Adventure Golf course became the 865th course visited and 516th played on our Crazy World of Minigolf Tour. Created by the Natural Play Company, it's a tricky layout and while there are hole-in-one opportunities, they are few and far between!

We warmed up for Sunday's tournament with a singles competition to celebrate National Miniature Golf Day. The in-form David Hartley added to his recent trophy haul by taking the win by one-shot, with Marion Hartley and me tied for second place.

Aberavon beach is such a lovely spot and provides spectacular views - Swansea Bay to the right and the steelworks to the left! It was a very nice place to spend time Putting.


Wandering along the prom I noticed an odd-shaped lump in the distance and upon closer inspection found it to be a huge concrete whale, surrounded by some penguins! I've been told that this was once part of another, long-gone, Crazy Golf course! I'd love to know more about Aberavon's Whale Park...

Sunday's Welsh Mini Golf Club Doubles Championship was a great event to be a part of. The Welsh Mini Golf Club are relative newcomers to the world of minigolf and have put in a lot of effort to create new events, play at different courses and become competitive on the national minigolf tour.

The weather was perfect, with not a cloud in the sky and only a slight sea breeze. This, though would cause a lot of 'classic' minigolfer's sunburn by the end of the day!

I teamed up with my former Midlands Minigolf Club team-mate Seve Kukielka for the event and after a shaky middle patch we qualified from the round-robin group stage as group winners. This meant a semi-final clash with Cardiff's combination of Holly and Stewart aka the team of 'How Hard Can This Be?'. Seve and I - as the 'Natural Disasters' - avoided catastrophe and qualified for the final match against 'Sturgeon's Nightmares', the combination of Planet Hastings' Dave Gomm and the Welsh Mini Golf Club's Simon Brown, who had defeated Cindy Kukielka and Andrew Edmonds in the other semi-final.


The final itself was a very close match, with Dave and Simon leading by one-hole heading to the 12th. Simon managed to drain a long second putt to close out the match meaning Seve and I were runners-up. Even so it was a nice event to compete in and the new course was well suited to the doubles format.


As I love holidays/minigolf/the Welsh coast I was in no rush to head home on Monday and stopped off at Porthcawl as I'd seen there was a Putting Green in Griffin Park. Unfortunately it wasn't yet open for the season and the groundskeepers were working on a few other areas of the park to get it ready for the summer.


We have been to Porthcawl before, although only to Trecco Bay Holiday Park where we played Adventure Golf back in 2009. So it was nice to explore a new seaside resort and play in some new amusement arcades.


I'd recently heard from the team at Greenspan Projects that there was a brand new minigolf course at Fontygary Leisure Park in Rhoose and luckily for me that was on my route.


It was great to have a round on the 18-hole Dragon's Quest Adventure Golf course. It looks really nice and has some interesting features, most noticeably the BIG red dragon!


My next stop was somewhere I know well, as my family had many happy holidays in Barry Island back in the 1980's and 1990's.

Barry Island is still recognisable from my time there 30 years ago, even though the holiday camp has been knocked down to make way for housing and a public car park.


While in Barry Island I revisited a lot of my old haunts including the Quasar and had a nice chat with the owner who told me about it's history. It opened in July 1992, so I must've been one of the first players through the door on our summer holiday that year!


Before I left I had a round on the Smuggler's Cove Adventure Golf course - a course we first played in 2009 - and had one last walk on the beach. 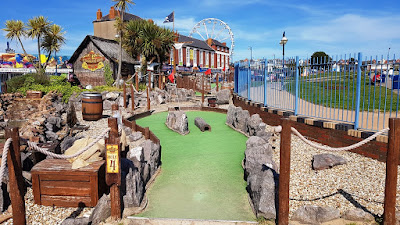 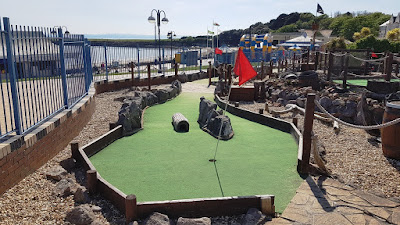 Rather reluctantly, I left Barry Island for the trip back north to Stockport and re-entered England at 5.38pm.


All in all it was a marvellous weekend and I'm looking forward to my next trip to the Welsh coast already.
Posted by Richard Gottfried at Tuesday, May 14, 2019