Mini Golf at FTW in Chicago

Checking out the indoor minigolf course at FTW in Chicago.

While in Chicago Emily made course visit #807 on our Crazy World of Minigolf Tour when she swung by FTW Chicago at 322 East Illinois Street. 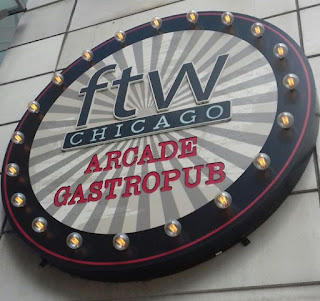 The indoor minigolf course at FTW - known as City Golf - is a 6-hole course themed on the Windy City.

As well as the miniature golf course FTW aka For The Win is home to over 130 arcade and prize games, four private party rooms, a 104 sq ft HD LED wall, a full bar and gastropub.

Check out the FTW website for more information, opening times and prices.

There are also For The Win locations in Albany, New York and Denver, Colorado. Back in 2009 I actually played tenpin bowling at FTW's Lucky Strike Lanes!

We've now visited 807 minigolf courses on our Crazy World of Minigolf Tour, 38 of them have been overseas.