Checking out the new Findar app at Adswood Park in Cheadle Hulme.


This morning we popped over the road to our local park for a wander and to try out the new Findar app.

Starting this Bank Holiday weekend 15 parks in the borough will feature in a trial of a new  Augmented Reality app, similar to Pokemon Go, which allows park visitors to spot four characters. The pilot will last until June.


On our 'thorough' walk around and through Adswood Park we found three of the four characters. We can't think where number four is!


The app has been created by Stockport resident Chris Hunt and is a UK first. Chris has said “There’s a number of great, examples of Augmented Reality, such as Pokemon Go,the Gruffalo Trail and Snapchat but none have crossed over into the mainstream to help bring people in to public areas."


The 15 parks featuring the Findar app are:

Check out the news item on Stockport Council's website for more information.

You can download the Findar app on the Google Play Store.

Adswood Park is a nice small park straddling the Cheadle Hulme / Cheadle border close to Cheadle Heath. Last year we found out the park used to be home to a Miniature Golf course! 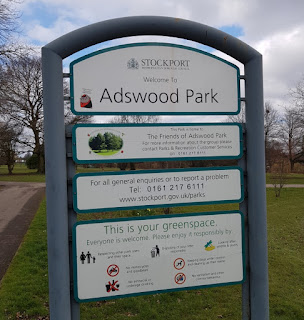 We're also part-way through visiting all the parks and green spaces in the Metropolitan Borough of Stockport after the Friends of Alexandra Park suggested it as a pleasant way to pass the time. We've been to eleven out of the 33 listed so far, plus eight that were not on the list.