How would you fancy a holiday to The People's Republic of Wigan? 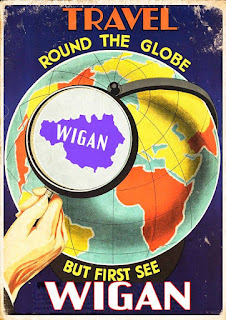 My friend Dylan Harris runs Lupine Travel, a Wigan-based business that operates holidays and tours to the far flung reaches and hidden corners of our world.

To celebrate their 10th anniversary Lupine Travel are running a very special one-off tour to their most extreme destination to date - The People's Republic of Wigan!

The four-day tour in June will feature trips to Rivington Terraced Gardens, Winter Hill, Wigan Pier, a walking tour of the town and more! You'll also be able to sample local delicacies including the (in)famous Pie Barm!

Last September we revisited Wigan to see the North Korea, An Exploration exhibition at The Old Courts, a showcase of a selection of rare propaganda posters and artifacts collected by Dylan from his travels to the country.


During our visit to Wigan we enjoyed having a wander and seeing the sights.


On Dylan's 2015 trip to North Korea he and his party competed in the first-ever Pyongyang Minigolf Open Tournament! Check out the blog post Mini Golf in Pyongyang, North Korea for more information and photos of the course, said to have been in Kim Jong Un's personal residence before he gifted it to the North Korean people and had it moved to its current location.


You may be unlikely to ever play the Mini Golf course in Pyongyang, but if you ever do head to Wigan be sure to visit Haigh Woodland Park where you can find two miniature golf courses - a new Adventure Golf and an old Crazy Golf.


It's not just North Korea (and Wigan) you can visit with Lupine Travel either, as they operate tours to other far-flung places including Chernobyl, Transnistria, Eritrea, Chad, Iran, Iraqi Kurdistan, Antarctica and more!

Visit the Lupine Travel website for more information on the tours they organise.