The team at Mighty Claws Adventure Golf are almost ready for play to tee-off at their new second site and storyline in Colchester - A Roman Ruckus! 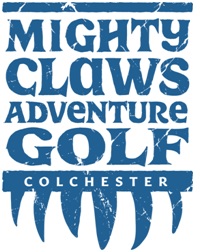 This time players find themselves in an exciting Roman adventure - appropriate for such a centre of Roman history as Colchester.

The 18-hole Mighty Claws Adventure Golf course will be open from 10am until dusk, seven days a week at Playgolf Colchester.

We're looking forward to playing the course on our Crazy World of Minigolf Tour. We've been to Colchester quite a few times and visited the minigolf courses in the town's Castle Park and Gardens. Sadly we've never played a single shot there as the courses were never open when we swung by.