A revisit to the Arnold Palmer Crazy Golf course in Whitby.

We originally visited the Arnold Palmer Putting Course in Whitby in March 2014 and earlier this year had the opportunity to return to the seaside town. Luckily the course was open to play this time!


It's a brilliant 9-hole Crazy Golf course with some classic Arnold Palmer obstacles including the Windmill and Waterwheel. 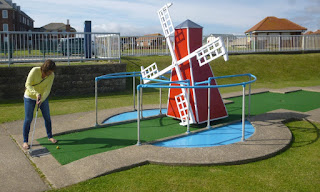 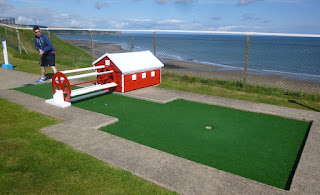 We had a fun and competitive round which ended in a draw after we both shot rounds of 20. 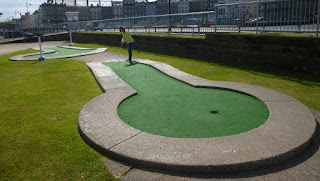 One round was certainly not enough for me though and I had to have another crack at the LUCKY LAST HOLE for a chance to WIN A FREE GAME PASS.


Luckily for me I managed the feat! The 'no expiry' free game card looks amazing and I won't be cashing it in as it's gone straight into my collection of miniature golf stuff.


You can find the Arnold Palmer Putting Course on North Terrace of the West Cliff in Whitby. It's well worth a visit.

The course was the 545th visited overall on our Crazy World of Minigolf Tour and became the 385th played.