A Northumbrian Night fundraising event for the Cullercoats Lifeboat.

A recent visit to the north east saw our friend John 'Johnny Waffles' Moore take us to a Northumbrian Night in aid of the Whitley Bay & Cullercoats Lifeboat Guild. 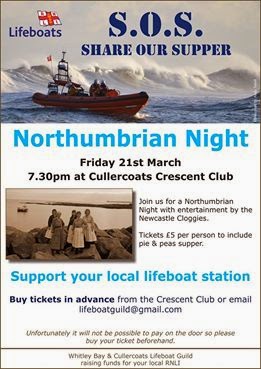 The evening was held at the Cullercoats Crescent Club and was good fun, with song & dance and food & drink in a nice environment, and all for a great cause.

Regular readers of this blog will know I'm a fan of the obscure and ludicrous, but I was amazed at one of the prize draws during the night.

We've been to some interesting events on our travels - with the Thanet Ladies Auxiliary Quiz Night 2008 a highlight - but the Members Box Draw at this event was up there with the best of them!

I'm a big fan of a good old fashioned tombola and always go in for a raffle, but the Members Box Draw saw a machine called the Raffletech 3010 brought out to decide the winner!


I'm not exaggerating when I say it wouldn't look out of place in a 'World of Tomorrow Feature' from an issue of a comic book printed in the 1950's!


The Northumbrian Night was great entertainment - from the Newcastle Cloggies (dancers and musicians) - in good company, in a nice social club setting and some very reasonable drinks prices.

Note: I erroneously called the Raffletech 3010 'The Raffletron 3000' after seeing it on the night. Either way, what a machine!

Update: January 2015
A photo of the Raffletech raffle robot in action at the Cullercoats Crescent Club has been sent to me by Kay Heslop!

In the grand history of the Crazy World of the Gottfrieds and their travels, many things have been have odd, weird and wonderful, but this one actually takes the cake... The Raffletech 3010.

John Moore has found details of the hallowed Raffletech 3010 machine!

It costs £279 + VAT, but comes without the futuristic wooden cabinet :-(

Check out the Kory Bingo Machines website for further info about the Raffletech 3010 and all manner of other bingo and lottery machines!