The third edition of the Knowley Grail was contested between ten BMGA Tour Pro players and US Minigolfer Jon Drexler at the Hastings Crazy Golf course following the final of the 2012 'Castle Golf' World Crazy Golf Championship after the players had decided that two days of international competition just wasn't enough and that they enjoyed the freezing cold weather conditions too much to head to the warmth of indoors/their transport home.﻿

﻿The 'age-old' rules of the Knowley Grail state that all players in the competition must use the same Minigolf ball - a 'Pinky Diver' by Reisinger - renowned for its super bouncy qualities. Any player scoring a seven during the round of Minigolf is automatically eliminated from the rest of the one-round competition. If eliminated the unfortunate player must take up residence on the nearest chair/bench of shame. 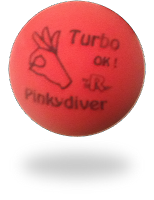 With two Pinky Diver balls available the group of eleven split into two groups and commenced play on the 18-hole Seafront Crazy Golf course in Hastings. Defending champion James 'The Rocket' Rutherford was in group two.

In a first for the Knowley Grail not one player was eliminated from the round. Adam 'Ak47' Kelly came remarkably close to being sent to a seat of shame with a score of six, but apart from that score most players were grinding out the twos, getting 'robbed' off of the metal cups, and scoring a smattering of threes and not enough aces.
﻿A remarkable shot was played by Jon Drexler on hole four when he was able to miss an ace and end up in the left hand bunker having travelled through one of the other bunkers on the course. This 'Drexed' shot was repeated moments later by AK47!
Two players were standouts in the Knowley Grail in Hastings, with Hastings' own John 'Big Top Ted' McIver setting the clubhouse lead with a score of 38(+2). John 'Johnny Waffles' Moore was also looking to record a good score and also came in with a 38 to force a play-off. The sudden-death play-off was the second in a row in the Knowley Grail tournament, following Rutherford's win in Margate in September.

On hole two of the Hastings Crazy Golf course Ted beat John to lift the title and take the £11 prize money.

These last two reports are a serious return to the form that made you minigolf's most beloved blogger, both made me chuckle! Well done Squire :)

Why thank you Orange Clock.

Close call with John Mciver and Alexander John Moore battling it out to the end! A nail-biter!