Report and Results from the off-course Shenanigan Competitions in Hastings

Both events were publicised in the unofficial booklet of the World Crazy Golf Championship and saw an international group of participants compete.

First-up was the World £2 Tat Challenge and 30 players took part. Earlier in the month James ‘Ruthers’ Rutherford had set the Tatting world on fire with his big win in the Crazy £2 Tat Challenge Open in Hastings which saw him win a grand total of 40 pieces of Tat!!! This saw him rocket to the top of the £2 Tat Challenge Order of Merit ranking list.

With the players from England, Germany, Finland and the USA having changed up their £2 stake money into 2ps they were given a quick rules briefing before the order was given and the players set loose on the buttons and their crack at becoming World Tat Challenge Champion.
﻿
﻿
Fourteen players in the field of 30 were veterans of the 2011 contest in which a total of 127 pieces of tat were won and were awarded to the winner, Polly, who had scored eleven 2p pusher prizes with her £2.

The 2010 World £2 Tat Challenge champion, the man they call “Johnson Paul Johnson” Paul ‘Johnson Paul Johnson’ Johnson, was making his third consecutive appearance and was hoping to find the form that won him the inaugural title.

The hot blooded contest saw many of the novice players making classic rookie errors such as feeding coins too slowly, or too fast, with a few playing at a medium pace. Costly mistakes indeed. Other errors from the players saw them going after big piece of tat thinking it’s all about the quality, not the quantity. This play is known in some quarters as “the Denis Exall gambit” and has never worked.
﻿
﻿
An early club house lead was taking by Will ‘Robbed’ Donnelly with an impressive eleven pieces of tat. He must of been dreaming of heading home with the grand prize, as the same quantity in the previous year’s event would of seen him crowned world champion. However 2012 was not to be the year of the young pretender.

With players pots of two penny pence pieces running dry the tournament saw players new and old resorting to the age old seaside amusement arcade practice of ‘ratting’. Brad ‘Roland Rat’ Shepherd and newcomer Craig ‘David’ Patterson were two such players who were out, then in, then out, then back in the game a number of times.

Irwin ‘Don’t call me Owen’ Johnson was another player that seemed to be endlessly back in the game after running out of cash. In fact event half an hour after the final whistle was blown and the semi-final in the Worlds Crazy Air Hockey was underway the Dudley youngster was still finding two pees to play. However with a grand total of just four bits o’ tat he’d be playing til 2013 before he neared a winning total.
﻿
﻿
The strongest overseas challenge for the title came from Finland and Pasi ‘Bruiser’ Aho. He eventually finished in the Bronze medal spot with a total of 17 pieces of tat, ahead of debuting player Mrs Kelly who had a good haul of 14 pieces. A fine effort, but not enough for the win this time.

In tied 15th place Top Chris (Overseas Category) Christian ‘Anthony Pope’ Fuchs from Germany managed to win three pieces, including a rubber duck for ‘The Fox’ to take back home with him. The USA’s ‘Hacksaw’ Jon Drexler managed to avoid drawing a blank on his debut, but was languishing in tied 25th place with a solitary piece of tat.
﻿﻿﻿﻿
﻿
Former £2 Tat Challenge Champion Alan ‘Not so Stormin’ Norman (ranked 3rd in the £2 Tat Challenge Order of Merit ) and 2010 Worlds Crazy Air Hockey Champion Kevin ‘Lost in the pub’ Moseley finished in tied 29th place after both players failed to win anything at all!? Quite how this happened is anyone’s guess. Perhaps they wisely decided to save their two quid stake money for something else and just said they didn’t win.

With Richard ‘Jaws’ Gottfried and James ‘Sharkey’ Rutherford almost all square with around 20 pieces of tat going into the home straight the other players joined the crowd to watch two of the masters of the game in action. The battle was back and forth until Gottfried ran out of money and with no 2ps seen dropping to rat he had to hold his breath and wait for the final outcome sitting on a club house lead of 23 bits of tat.
﻿﻿
﻿﻿Hot on the heels of his win earlier in the month Rutherford seemed to be powering to success and had a never-ending pot of money. Unfortunately it and his luck ran dry as his pockets sat at the 21 pieces mark, meaning that Richard Gottfried took the win and the 166 pieces of tat haul that was won by the competitors!﻿

Following the 2012 Worlds there is no change at the very top of the tat challenge tree as James 'Ratters' Rutherford maintains his lead with a total of 81 pieces of tat won from his five outings (an impressive 16.2 pieces per event). In second place is Richard 'Shark King' Gottfried with a total of 63 bit.

Pasi 'Pastie Jarno' Aho leaps up from 7th to 3rd with a total of 29 pieces of tat from three events. Alan 'Stormin' Norman drops from tied 3rd to 5th, with Emily 'Lemony' Gottfried moving down one from tied 3rd to 4th. The highest new entry is Mrs Kelly with an impressive debut haul of 14 bits of tat to take a share of 7th place alongside Seth 'AWOL' Thomas who was MIA. Brad 'Ratman' Shepherd and Keith 'PP' Kellard round out the top ten places with the pair tied in 9th spot.

With no real let up between competitions the bracket for the Worlds Crazy Air Hockey Championship was drawn up by Buttons Committee Executive Members Scott Lancley and Emily Gottfried. 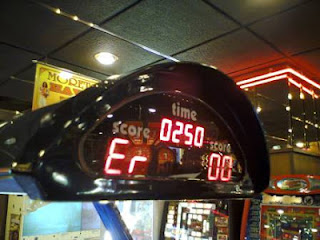 The straight knockout event saw 16 players go head-to-head in first to seven, or until the time-limit expired matches. With three Air Hockey tables available the action came thick and fast.

In round one results:
- Johnny Waffles lost to Denis Exall 4-5
- Will ‘Robbed’ Donnelly was robbed in his match to Scott ‘Donkey Gringo’ Lancley 1-4 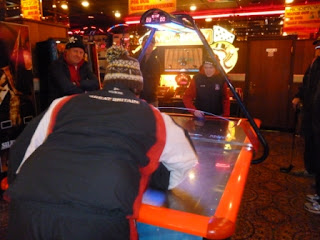 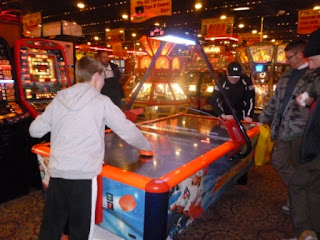 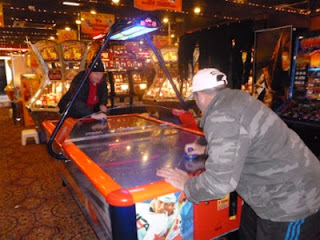 - Brad ‘The Fist’ Shepherd punched his way to victory with a 7-3 win over 2010 Champeen Kevin ‘Max’ Moseley
- Christian Fuchs was outfoxed by Craig ‘David’ Patterson in the battle of the newcomers, losing 4-6
- Marc Chapman wasn’t forceful enough in his losing effort to Pasty Arno 1-5

A random draw was held before the quarter finals commenced. The matches saw:
- Johnson Paul Johnson lose to The Fist 5-7 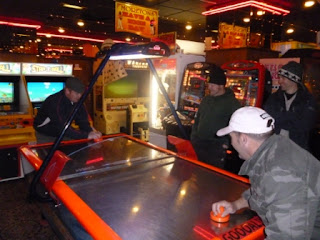 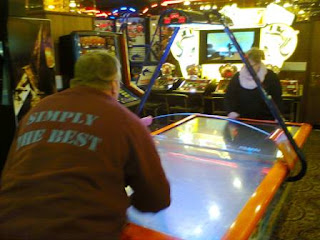 - Drex lost to Pasty 2-7 in an international incident 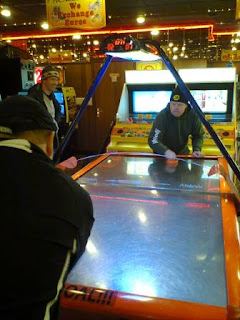 There was little pause in the action before the semi-final matches got underway. Margate’s Scott Lancley was drawn against the dangerous Finn Pasi Aho. The contest ended in a 4-4 draw. Eschewing the usual sudden-death extra-time golden-goal play-off, or a game of Rock Paper Scissors the pair settled the result with a coin toss. Pasi won.

In the second semi-final Denis ‘Last Exall Standing’ Exall beat Brad ‘The Fist’ Shepherd 7-5 to set-up an England-Finland grand final for the title of Worlds Crazy Air Hockey Champion of 2012!﻿﻿﻿


﻿﻿﻿With the international player champing at the bit since his arrival in Hastings he took the lead and Denis assumed the same position that faced his brother Phil in the legendary final of 2011. Denis put up a valiant effort, but it wasn’t to be for him on this occasion as Pasi Aho scored a seventh and final goal to win the match, the title and the £1 prize money with a 7-3 scoreline.
﻿
﻿