During a break in play at the BMGA British Minigolf Championships at Wroxham Barns in Norfolk, me, Steve Gow and Brad Shepherd decided to compete in an Old Zeke's Shooting Shack Shoot-out! 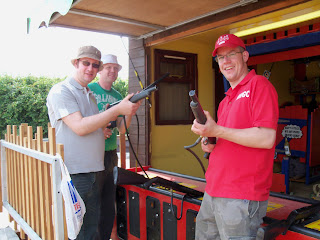 Link to other posts about Shooting Shacks played on our many journey's to seasides and amusements around the UK.
Posted by Richard Gottfried at Tuesday, June 08, 2010