Luton Minigolfers Richard and Emily Gottfried were in action in Norfolk over the weekend as they competed in two events in Hemsby and at Wroxham Barns, Hoveton.

The competition format saw teams of two selected via a random draw. In the 12-team field Emily and her partner, London’s Brad Shepherd, finished in third place. The pair had tied with eventual runners-up Nicky Chitty and Marion Homer, after both teams finished with 18-hole totals of 97(+25). However, in the sudden-death play-off it was Marion who won it for her team at the fifth extra hole. Richard and his partner, Birmingham’s Owen Johnson, finished in tied 8th place with a score of 104(+32). 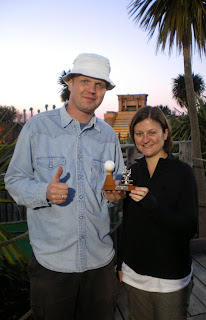 Emily said “The tournament was great fun, and it was a good experience to play with Brad. He was an excellent playing partner and although we lost the play-off, we were both really happy with our third place finish.”

This 11th place is Richard’s best finish in the BMGA British Championships to date. His previous results in this competition since his debut in 2007 have been 19th, 18th and 25th. 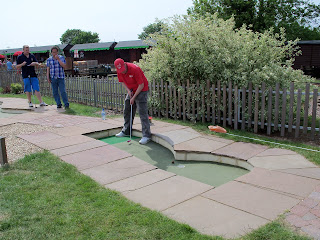 Richard said “Although I didn’t hit my objective of achieving the win, or a top ten finish, looking at my previous results in the British Championships I’m pleased to have done better than other years. I’m also happy to have got a tournament average around the 36-mark on the Wroxham Barns course having previously hit rounds in the high 30s and low 40s.”