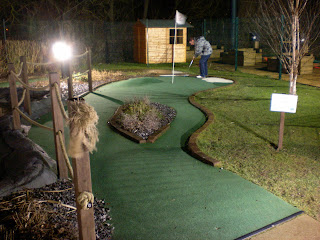 At the end of the round we were all tied on a score of 48(+12) which forced a play-off at the 18th hole to decide the winner.

In the play-off 'Rowdy' Russell was first eliminated after hitting a three, and in the second play-off round I scored a two, compared to Emily's three to win the bragging rights!

The players on the podium. 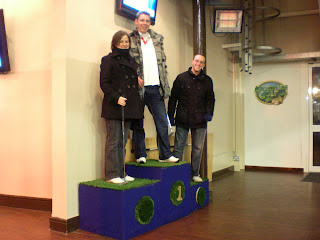 We also played two Putting Green Challenge matches while we were there, with Emily and Russell both on 9(-1) in match one, and with Emily the victor in match two, with another one-under round of 9.

The Adventure Golf course at Watford was the 8th we played on the Crazy World of Minigolf Tour way back in December 2006.

We've played there a number of times over the years and the course remains one of the most difficult we've played. It's still a good fun course, and the centre's facilities are good.

TopGolf Watford also has a Putting Course, which until fairly recently was a 9-hole course, but is now only 5-holes. The photos below show the difference. 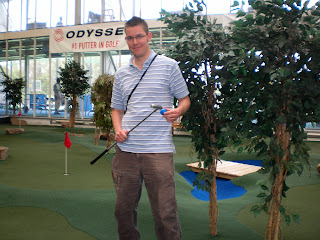 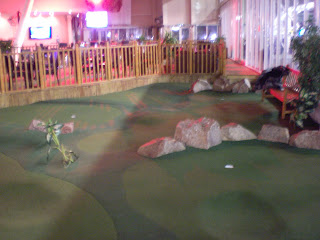 A hole to nowhere!? 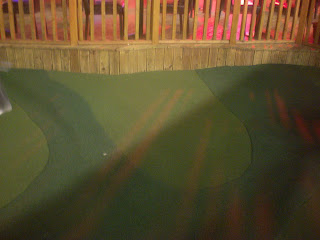 The 4th hole on the 'new' course is also incredibly short.


Details of other Irregular Mini Golf Tour competitions we have played there can be found at the links below:
http://hamandeggerfiles.blogspot.com/2009/10/adventure-golf-at-watford-topgolf.html

Photo: Christopher 'One BMGA Tour Event' Gottfried & 'Squire' Richard Gottfried line-up during a round at TopGolf Watford in April 2007. 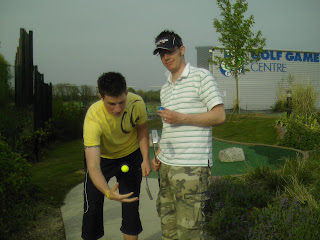