Held at the Pleasure Beach’s 12-hole Adventure Golf course, Richard and Emily Gottfried were invited to compete in the second Blackpool Pleasure Beach Open minigolf tournament along with other members of the British Minigolf Association, as part of the 2009 Blackpool Illuminations weekend.

In the field of eight players, which included five Great Britain Internationals, Richard won the three round 36-hole competition with scores of 24 (par), 26 (+2) and 31 (+7) for a total of 81 (+9), eight shots ahead of Newcastle’s John Moore in second place, and 17 shots ahead of Guildford’s Steve Gow in third. 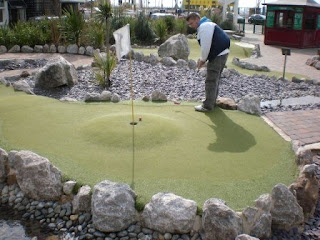 Richard said “I am very pleased to have won the Blackpool Pleasure Beach Open, and by quite a margin. My first round of 24 was probably the best round of minigolf I have ever played and that set the pace for the rest of my tournament. Heading into round three I had a 13 stroke lead and that is an excellent position to be in.”

“It’s really good to have picked up my third win of the season, and to win with such a low score and get a course record is a great achievement too. The Pleasure Beach is a fantastic tournament venue and the event had a great atmosphere with the Illuminations celebrations. It’ll be great to return to defend my title next year.”

Emily said “I am disappointed not to be able to retain my course record, but I am pleased that Richard was the one to take it from me. He was on fire and really deserved to win the tournament and smash the course record. I played poorly, but I am already looking forward to going back next year and trying to get my record back!” 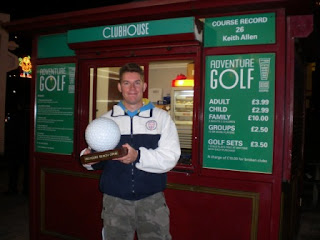