Making it a Blockbusters NQ night

Drinking in a video store. 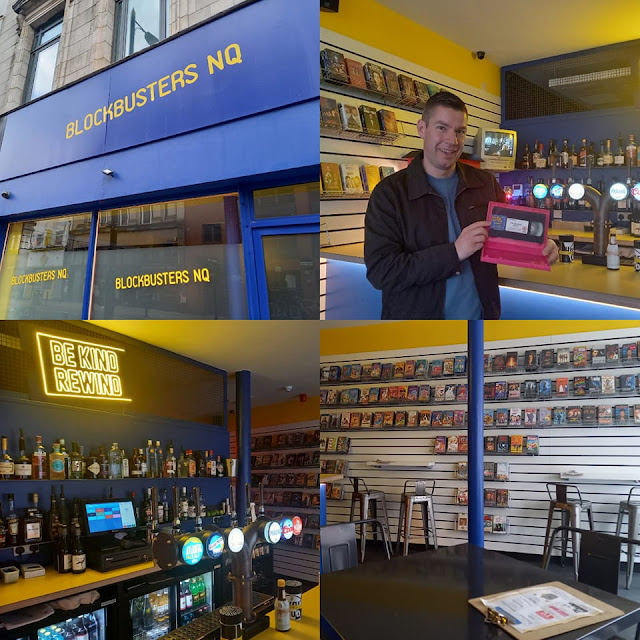 We finally made it to Blockbusters NQ in Manchester last Thursday.
It was nice to have a drink in a 'video shop' speakeasy.
We first heard about the nostalgia-inducing video rental shop bar last November and have been looking forward to stepping inside since we first saw it.
The theming is really well done and the bar had a chilled atmosphere. It's worth a visit.
Most of the videos are retail ones rather than ex-rental tapes, but there are some big box treats to find lurking on the shelves.

Check out the Blockbusters NQ website for more information and opening times.

We're big fans of video, videos stores, retail history and retro stuff and have been visiting and documenting the last remaining traces of the Blockbuster brand in the UK over the last few years. We've seen a number of the brand's shopfronts, signs and QuikDrop boxes. As well as some other video shops.
The first of the old Blockbuster locations we found was also in Manchester, just up the road from us at Fallowfield Retail Park.

The first Blockbuster Video store opened in Dallas, Texas, USA in 1985.
At its peak in 2004 there were more than 9,000 stores around the world. 500+ of which were in the UK.
Blockbuster ceased operations in the UK in December 2013. At the start of that year there were 528 Blockbuster locations in the UK. The number dwindled until October when only 264 shops remained. The remaining stores closed on the 16th December.
There is now just one Blockbuster Video store left open. It's in Bend, Oregon, USA.
However, the UK's high streets, shopping precincts, malls and retail parks still hold traces of the brand. And we've been to most of them!
We've now visited 28 former Blockbuster Video stores since we found the remains of the Fallowfield shop.
Posted by Richard Gottfried at Saturday, June 11, 2022