A trip down memory lane at Arcade Club in Bury.


We finally visited Arcade Club in Bury last Saturday. I don't know why it's taken us so long! 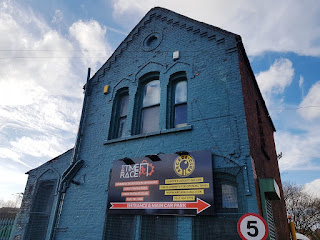 As a big fan of retro gaming and amusement arcades I've got many brilliant memories of playing arcade games at holiday camps and seasides back in the 80's and 90's, so it was superb to visit a venue that has hundreds of arcade cabinets set-up from the era. 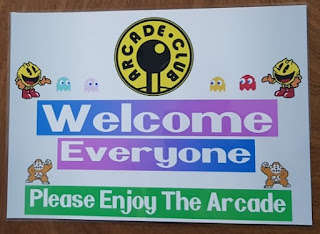 Arcade Club operates an entry fee policy after which you can access all of the games without having to fumble around for change. As it was our first visit we opted for the £16 price for access to both levels. For £12 you could access one or other of the levels.


Level 2 is home to a range of modern and imported arcade games, VR games, pinball tables and gaming PCs. It's not really my cup of tea but it was still nice to have access on our visit. The floor was absolutely packed with people having fun - I haven't seen an arcade like it for years!


Level 3 was what I was interested in and I wasn't disappointed. At Arcade Club you'll find row upon row of lovingly restored arcade cabinets offering everything from Asteroids to Pac-Man - and probably a game beginning with Z.

It was a bit overwhelming to see so many games to play, all set on free-play, and we didn't know quite where to begin. Luckily for us we spotted a 2-player Parodius game and jumped on that. We're big fans of Parodius on the SNES so we quickly got into the swing of things and enjoyed playing for a few credits before we were lured away with another 249 or so games to play. 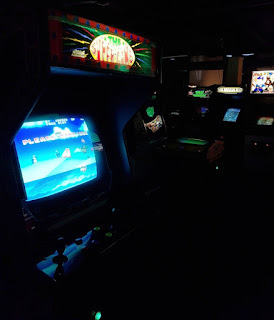 When I was a kid my two brothers and I used to love visiting the arcades at Barry Island and Minehead holiday camps and when we ventured out to the seaside amusement arcades there were even more games to play.

Until I bought Pac-Land for the Atari Lynx and PC Engine last year I hadn't played the game since a stay at Butlin's Somerwest World in Minehead in the 1990's. Over the all of the noise at Arcade Club I could clearly hear the music from the game playing and so had to give it a play. I wasn't disappointed.


Back in the 80's and 90's there was no way I had the money to master any arcade games, but with the games set to free-play and unlimited credits available I was able to complete MERCS (a game I used to have on the SEGA Master System) and also get on the leader-board on Indiana Jones and the Temple of Doom.

One game I wasted many many many 10p's on as a kid was RoboCop. Playing it now the graphics are still cool and my skills on it are still as rubbish as they were 30 years ago. It was still fun to play though, and just as back then it was good to watch other better players working their way through the game.


Arcade Club is a superb venue and I'd consider it a living museum as well as a retro throwback to those halcyon days of the 80's and 90's when an amusement arcade didn't consist of mostly ticket redemption games.


We had a wonderful afternoon at Arcade Club and after three hours of pretty much non-stop gaming we were ready to head outside for some fresh air and a chance to give our weary backs, necks and wrists a rest.


We will be back.

You can find Arcade Club at Ella Mill in Bury, Greater Manchester.

Check out the Arcade Club website for more information, opening times and prices.

The team at Arcade Club are putting the finishing touches to their second venue, with the site in Leeds opening soon. We're looking forward to visiting.