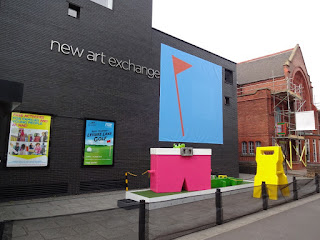 Last summer our friends and minigolf rivals Gareth and Lhurlyn Holmes were lucky enough to visit Doug Fishbone's Leisure Land Golf course at the Venice Biennale. This year the course came to England.


It was brilliant fun to play and very well built. It was also pleasing to defeat another minigolf rival and friend Jam Trubridge in our match-up. At just £2 per player it was a bargain to play too.


Doug Fishbone's Leisure Land Golf is at the New Art Exchange in Nottingham until the 19th June. It then moves on to the Derby QUAD. 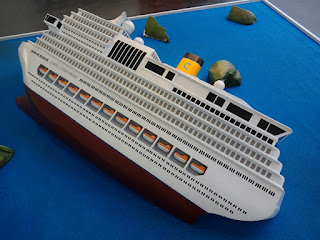 On our travels around the world we've played some interesting courses, including some designed for art shows, exhibitions and as playable sculptures.

We've played art-based minigolf at the one-day only M!MS Mini Golf course in Bedford, Crazee Golf at the TinType Gallery in London, the Bompas & Parr food architecture course on the roof of Selfridges and Putt Putt #2 by TURF Projects in Croydon. We've also not played art courses in Clerkenwell and Folkestone - where the remnants of the old Arnold Palmer Crazy Golf course were used to create a series of beach huts!

We were also recently involved in the London Design Festival's Kickstarter campaign to build a Crazy Golf course in Trafalgar Square.

You can also now sign-up to receive our miniature golf newsletter.
Posted by Richard Gottfried at Sunday, June 12, 2016