A visit to the Mini Golf course in Sirmione, Italy.
﻿ 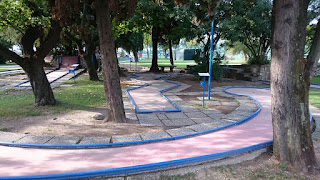 Charter member of the Crazy World of Minigolf Tour Christopher Gottfried has found another miniature golf course while overseas!


On his mini-honeymoon in Sirmione he spotted a Mini Golf course!


Christopher told us they were having an afternoon stroll and about half a mile from where they were staying in Sirmione they spotted the 18-hole course. He said they saw only two people playing there.
﻿ 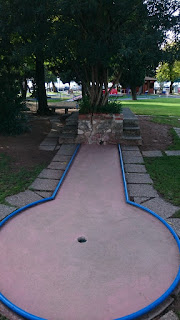 Sirmione is the small peninsula that points out at the southern part of Lake Garda. Christopher tells me that apart from the thermal spas and the ice cream parlours, the Crazy Golf course was the only other nearby attraction in the historic town. 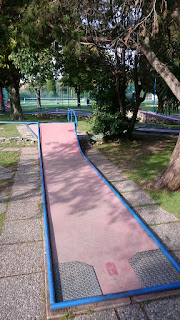 The course is a style of minigolf called Concrete or Beton. We've played a few of them on our travels. Most notably in Finland and Sweden while on international duty with the Great Britain team.


You can see links to other courses visited by Christopher at the bottom of the Crazy World of Minigolf Tour links page.