Putt In The Park Mini Golf at Battersea Park in London 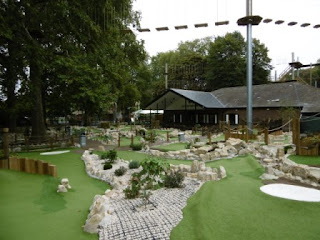 On Monday 21st September* we made the 671st visit on our Crazy World of Minigolf Tour and played the 389th course since we began our Tour in September 2006. The location was London's newest course - Putt In The Park at Battersea Park.


The 12-hole venue opened earlier this summer and is the second course from the team behind the Wandsworth Park Minigolf course.


In our match-up Emily defeated me by one shot - 36 to 37. I was incredibly fortunate that Emily was unlucky on the last hole or the margin of my defeat would've been much much worse!

The Battersea Park course is three miles from its sister course at Wandsworth Park. That Putt In The Park venue was the 323rd played on our Tour. 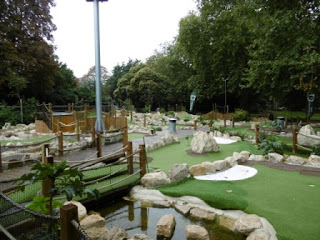 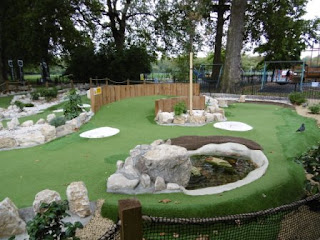 When we began traveling around and playing minigolf there were an estimated 600 courses in the UK. This year we visited our 600th overall and 600th in the UK - at Swanage and Goodrington Sands respectively. On our road-trip around the South West of England we also visited the 650th course in the UK - in Padstow.

Having visited 21 miniature golf courses overseas means that the Putt In The Park course in Battersea became the landmark 650th we've visited in the UK.

Related blog posts:
- Crazy World of Minigolf Tour
- Mini, Crazy and Adventure Golf courses in and around London
- Putt in the Park Minigolf at Wandsworth Park, London
- Minigolf with The Putting Penguin at Putt in the Park

* It was apt that such a BIG minigolf course visit would take place on the 21st September as the date is always Miniature Golf Day!