On Saturday 16th of August 2014 Museum Makers and Wardown Park Museum in Luton will attempt to break the Guinness World Record for the "Largest Gathering of People Wearing Boater Hats". 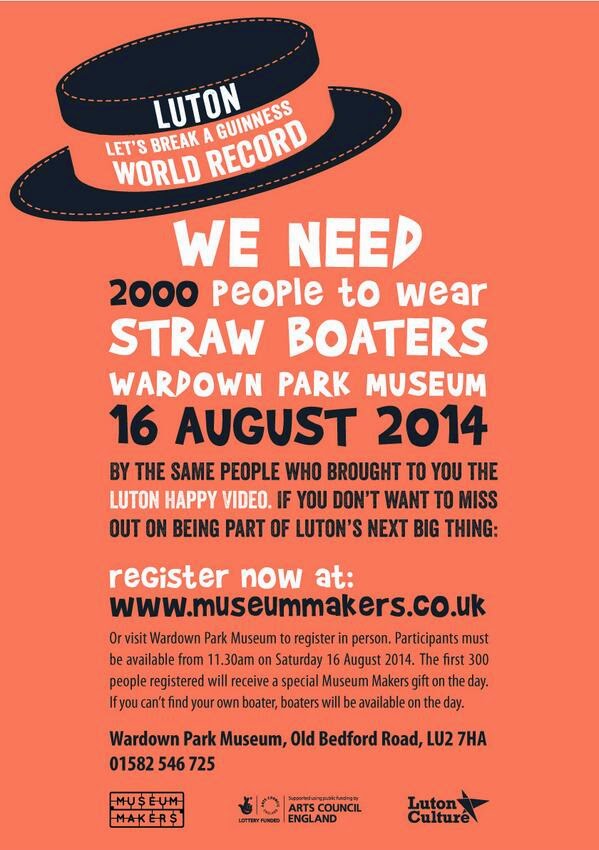 The current world record is 250 people, but the team behind the attempt are aiming to get 2,000 people involved!

Luton has a long tradition of millinery and Wardown Park Musuem houses a collection related to hatmaking, with over 700 hats and materials from the trade.

For more information and to register as a participant visit the Museum Makers website.

The Guinness World Record Attempt will take place at 11.30am on Saturday 16th of August.

If you don't own your own straw boater there will be some available on the day.

The event sounds fun and a little less extreme than some of the other Guinness World Record Attempts I've undertaken, such as Hopping and Brussels Sprouts eating. I've also taken part in record attempts for the most people to ‘High Five’ simultaneously, the UK's longest Conga line and the Largest picnic ever in the UK.

The Museum Makers are a new team, consisting of members of the community, who are dedicated to saving, cherishing, running and recreating Wardown Park Museum in Luton.