Report from the 2012 Crazy £2 Tat Challenge Open in Hastings

James Rutherford rockets to victory in the first £2 Tat Challenge of the year!

On Friday 12th of October a group of Crazy Minigolfers headed to the Old Town Amusement Arcade for a £2 Tat Challenge Contest.

The players were in town to practice ahead of that weekend’s 12th annual Planet Hastings Crazy Golf Club Open tournament, but due to the adverse weather conditions an executive decision was made to head to The Buttons for a Tat Challenge.
Arriving just in Hastings just in time James ‘Mr James’ Rutherford joined the gang to play in the first Tat Challenge of the 2012 season. The competition would act as a warm-up for the 2012 World £2 Tat Challenge that is now a part an unofficial part of the Castle Golf World Crazy Golf Championships weekend.
Heading into the Crazy £2 Tat Challenge Open James ‘Mr Rutherford’ Rutherford declared that he would win the contest. His opponents scoffed at this remark, little knowing that he had spent the previous weekend in Hastings ‘mapping the buttons’!
Michael ‘The Champ’ Smith and John Moore ‘John’ made their debuts in a £2 Tat Challenge and after a quick briefing on the rules were let loose with their pots of two penny pence pieces.
The contest was an all-England clash with the field also including the inaugural Worlds £2 Tat Challenge Champion Mr Paul ‘Johnson Paul Johnson’ Johnson, Emily ‘Lemony’ Gottfried, Owen ‘Don’t call me Irwin’ Johnson and the Tat Challenge Order of Merit Number One ‘Squire’ Richard Gottfried.
With a new array of prizes on offer in the 2p pushers the avid tatters were in their element trying to win as big a haul as possible and take the prize of ‘all the tat’. However a clear lead was built up early on by ‘The Rocket’ James Rutherford who managed to somehow keep his pot of 2ps constantly full and his pockets filling up with Thumb Wrestling characters as his prize.

Prior to the Crazy £2 Tat Challenge Open the largest winning score had been 11 pieces of tat by Polly at the 2012 Worlds £2 Tat Challenge, with other victories totalling 10, 9 and 7 pieces of tat won. In fact in the first three Tat Challenges the total tat won by all competitors was 36, 31 and 39 pieces. These figures were blown out of the water as James ‘Ruth’ Rutherford won 40 pieces all by himself!!!

The nearest challenger and still a way off Ruthers’ lead was Richard ‘Second Best’ Gottfried with 13 pieces. John ‘YI’ Moore and Emily ‘Lemons’ Gottfried tied for third-place with five pieces apiece and had no money left for a play-off. Paul ‘The Johnson’ Johnson managed to win 3 bits, while Owen ‘Irwin’ Johnson didn’t hit the jackpot with only a couple of pieces. In last spot was Michael ‘No Tat’ Smith with zero pieces of tat. Rather reminiscent of his minigolf team-mate, rival and fellow tatter Marc ‘Chappers’ Chapman’s debut at the 2010 Worlds when he also came away with nothing for his £2 stake. On a related Marc ‘The Force’ Note, one of the prizes won appeared to be a life-like action figure of the renowned Minigolfer and Tat Challenger!
﻿
﻿
2012 Crazy £2 Tat Challenge Open - 12/10/12

With his massive haul of tat the pressure will surely be on all of the other competitors to up their game at the next £2 Tat Challenge! 40 pieces with £2 of 2ps is an extraordinary amount to win, whether this record will be beaten remains to be seen.
Following the Crazy £2 Tat Challenge Open James ‘Ruthers’ Rutherford has moved up to the top spot, with ‘Squire’ dropping down to number two. Emily moves up from 8th place to join Alan ‘Stormin’ Norman in tied third place. 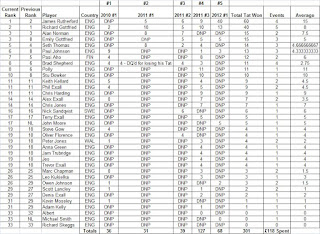 I'm going to beat "The Man" Ruthers in this weekends £2 Tat Challenge. That Title Is Mine!