At the recent Star City Open weekend in Birmingham my fellow Crazy Golfer and BMGA Tour minigolf rival Brad ‘The Fist’ Shepherd pointed me in the direction of the 1970’s Yorkshire TV show ‘Indoor League’. As a fellow fan of odd and obscure sports he knew I would appreciate the games on offer on the programme, he wasn’t wrong.

Indoor League was a show that ran from 1972-1977 on Yorkshire Television/ITV and was presented by Cricket legend Fred Trueman. The games played on the show include Darts (using a Yorkshire board, which has no ‘trebles’!), Skittles, Shove Ha’penny, Table Football and a game that took my fancy – Bar Billiards.

In all my years frequenting pubs I had never played the game and have only ever seen a glimpse of a table before – at The White Horse Pub in Southsea. With Indoor League whetting my appetite for a play of the game I took to the web to search out information on the game and whether there were any tables near to us in Luton...?

First of all I found that there is an ‘All England Bar Billiards Association’ that governs the game and organises tournaments in 18 counties, which are mostly in southern England and Jersey.

A link on the All England Bar Billiards Association (AEBBA) website shows the location of Bar Billiard tables in the UK. Checking this out I saw that the closest ones to us were at The Strathmore Arms pub in St Paul’s Walden (near Hitchin, Herts), The Red Lion at Studham (near Dunstable, Beds), Bedford Arms in Hitchin and at The Bucks Head in Little Wymondley (near Hitchin, Herts). Also on the list and fairly nearby were The White Lion in Hemel Hempstead, The Goat Inn in St Albans, The Chequers Inn in Knebworth, Our Mutual Friend in Stevenage and The Unicorn in Cublington, Bucks. I have also found out via twitter that The Orange Tree in Baldock, Herts does have a table (and also sells Gluten Free food and Beer).

So, on Friday 27th January 2012 we headed to the closest pub on the list – The Strathmore Arms pub in St Paul’s Walden.

Though close to Luton, a mere 8 miles, the B Road there is long, winding and quite pot holey – far removed from the hustle and bustle of Luton. It’s not often we venture out to the villages surrounding Luton. We have passed through some of them to reach the Offley Oriental Chinese Restaurant (which serves some great Gluten Free food). We also regularly go to Tea Green Golf Club at Wandon End, but this is very close to the Luton border.

When we arrived at The Strathmore Arms we ordered some drinks and then asked if they had a Bar Billiards table. The obliging barman said they did and pointed us around to a room attached to the main bar area where the table stood. And what a sight it was. The Barman told us it was a “pound a go” and left us to it.

Having only seen the game played on TV before, Emily and I had a quick glance at the rules on the plate affixed to the table itself, put a quid in the machine and started playing.


After the first practice game we had a deeper read of the rules sheet that was beside the table and realised we had been playing our own version of the game! We then decided to play a best-of-3 games match to decide the Champion.


In the first ‘proper’ game I managed to beat Emily with a final score of 400 to nil after Emily knocked the Black Peg down in the final ball shootout. Emily had reached a score of 940 before this was wiped out.

In the second game of the best-of-3 match I once again won to take the overall victory. This time I had a score of 1000, to Emily’s 90. This was a much cleaner match, with very little peg knocking down!

In our fourth and final game Emily beat me 70-0. I had reached 180 but knocked the Black Peg down to wipe-out. Emily’s opening break was a score of 380 before she played a foul shot to wipe-out the break.

Once we’d finished our games we had a chat to the bar staff and some of the friendly locals. We got some further information about Bar Billiards and that it used to be a very popular game in Hertfordshire (and was one of the originating spots for the game), however there are not that many tables left to play.

As we were so interested in the game a few of the locals asked us if we were on a mission of some sort relating to Bar Billiards. We told them we weren’t (yet), but were on a Crazy World of Minigolf Tour! As I’m like a dog with a bone about new/old/interesting/fun/obscure/odd games and sports and challenges who knows, we may start-up a Crazy World of Bar Billiards Tour!


Emily was also interested in the Pudding Club that is run at The Strathmore Arms and there was a lively discussion going on amongst the staff and regulars over the latest offerings and the current rankings list!

A Dart Board was also set up next to the Bar Billiards table. I may take my ‘arrers next time we visit.

Looking at the Bar Billiards table I noticed that there was a badge affixed to the table we played that was from the “National Bar Billiards Association”. When I got home I had another look on The Online Guide to Traditional Games website and reread about the game and saw that National Bar Billiards Association was a pre-World War II organisation! The game started in the UK in the 1930’s, so the table at The Strathmore Arms could well be one of the first in the UK then! 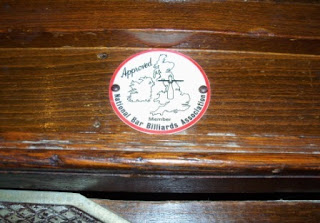 Speaking with Brad ‘The Fist’ Shepherd and fellow sports and games enthusiast Marc ‘The Roller’ Bazeley I have found out they know of other tables in London, Gravesend and Northampton. ‘The Roller’ also tells me there is a thriving Wellingborough Bar Billiards League and when Emily and I head to Northants for a game then the Crown & Anchor Pub in Northampton is the place to go.

It seems a Bar Billiards ‘side-tournament’ or two is in order.

Bar Billiards was great fun (and a lot more enjoyable than pool and/or snooker)! Can't wait to play again!

Hopefully I won't wipe out my big break next time :)

I found out today that The Red Lion Pub in Studham, near Dunstable, Beds no longer has a Bar Billiards table.

Yesterday I was unable to get to Guildford due to the snowy weather, so couldn't play Bar Billiards at The Royal Oak, which I am informed still does have a Bar Billiards table and a Dart Board.