Luton Minigolfers Richard and Emily Gottfried were in action over the weekend as they competed in events at Stratford-upon-Avon’s 18-hole Minigolf Course at the town’s Recreation Ground.

First up was the Midland Open competition on Saturday 24th April, with Richard finishing 4th overall in the 37 strong field. 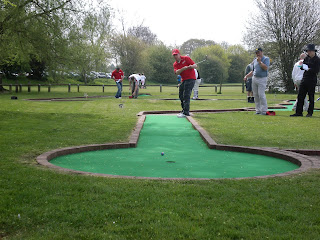 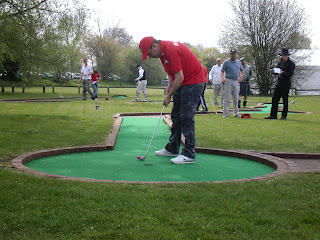 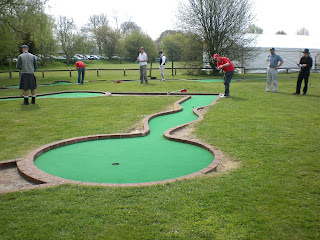 Richard also won the Aces Champion prize for most holes-in-one over the Midland Open tournament, scoring 13 over 54-holes. 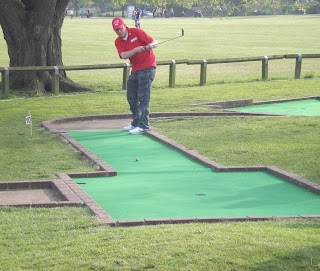 The 2010 BMGA British Doubles Championships were held on Sunday 25th April, with both Richard and Emily competing.

In the tournament Richard teamed with Bath’s Kevin Moseley, while Emily teamed with Welsh Ladies number one, Cindy Kukielka from Cwmbran. 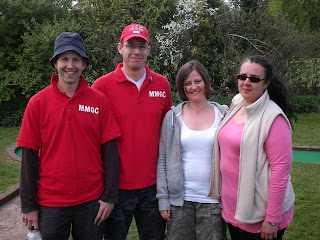 Richard’s team achieved third place overall, a significant improvement on their 9th place finish last year. Emily’s team were also in the mix at the top of the leaderboard, and eventually finished in 4th place, following a play-off defeat to Richard’s team.

Each of the competing 16 teams played in a qualifying group stage, before moving on to a knockout stage to determine the final rankings. Both Richard and Emily’s pairs qualified for the play-offs for positions 1-8. Emily’s team did so by way of a Sudden-Death Play-Off victory over the team of Margate’s Scott Lancley and London’s Nick Chitty, after both pairs were tied on points in their group. 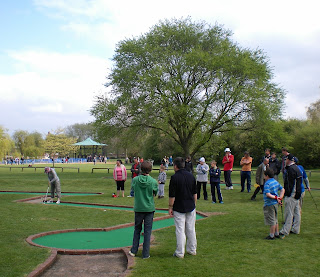 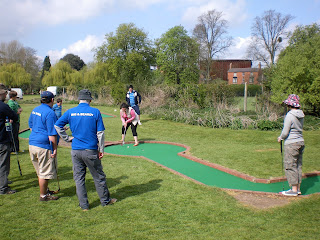 Photos: Emily and Cindy play-out hole 3 in their sudden-death play-off

The Gottfried/Moseley team had a win/loss record of four wins, one draw and one loss. The loss came in the semi-final clash against eventual champions Chris Harding and Marc Chapman. 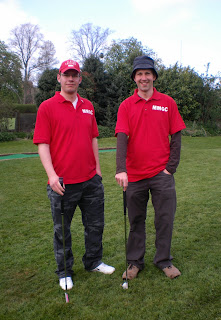 Photo: The team of Squire Trelawney

The Gottfried/Kukielka duo had a win/loss record of two wins, one draw and three losses. They missed out on a place in the final following a semi-final loss to the Hastings team of Tim Davies and Ted McIver. 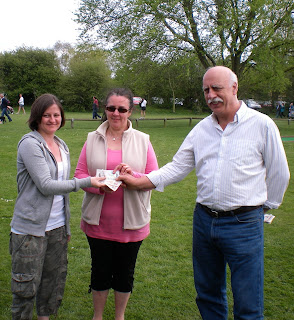 Richard said “Heading into the weekend I was aiming for top-ten finishes and was confident as I’ve had some good results in Stratford in the past. So to get a fourth place in the Midland Open and then follow it up with a podium finish in the British Doubles Championships is brilliant. I’m also really pleased for Emily and her partner Cindy as they battled through and achieved a great finish too.”

Emily said “I really enjoyed the tournament, and the doubles matchplay format is great fun. Cindy I won the most important matches and our sudden-death play-off with strong teamwork and we enjoyed every minute! This is the highest ever finish for a female pair in the competition, so we’re really pleased with what we achieved.”

Well played. What did you have to eat the night before the doubles?

Not sure if there is a pattern for silver medal though ha ha.

Good luck with your quest to find the perfect pre-match meal!

BMGA Tour Rookie Oliver Florence has got a poll running on his blog regarding his choice/change of diet regime ahead of tournaments. There is also a quote from me in the story 'Florence ponders diet change to break tournament duck'.

BMGA Tour player Adam 'AK47' Kelly has uploaded some videos from the BMGA British Doubles Championships to his YouTube channel, including action from the Group Match between the teams of Squire Trelawney (me and Kevin Moseley) and Casual Force (Sean Homer and Marion Homer).