The Joy of the Amusement Arcade - Crazy Air Squash in Hastings

Back in October 2008 Minigolfers Richard Gottfried and Steve Gow battled it out in a game of Crazy Air Squash at The Deluxe Amusement Arcade in Hastings, East Sussex, which in turn was a kind-of-rematch from their original Air Hockey battle at Wroxham Barns, Norfolk.

With the previous matches being a draw and one win to Steve, the battle to become the UK (and arguably the world's) number one Air Hockey & Variants Champion drew the attention of two new challengers (and fellow Minigolfers) - Scott Lancley and Kevin Moseley.

In a new format, the four would battle it out at the Family Amusements on Hastings' Sea Front following the first day's play in the BMGA British Championships.

In the other first round match Scott Lancley beat Kevin Moseley 5-3 to take him through to the final.

Both matches saw plenty of off 'field' action with the puck being lost at least five times.

In the final, Steve Gow lost his crown to newcomer Scott Lancley in an exciting, high scoring and very close match, with the final score standing at 8-7.

Steve Gow and Richard Gottfried ahead of their Crazy Air Squash match. 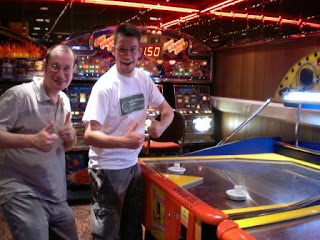 Heads of Tails - pre-match coin toss to see who hits the puck first. 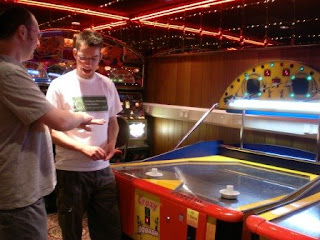 Scott Lancley and Kevin Moseley battle it out in their first round encounter. 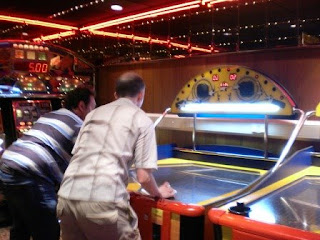 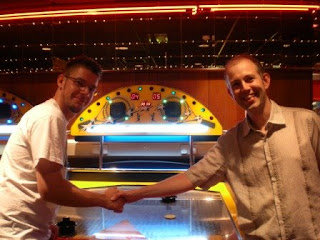 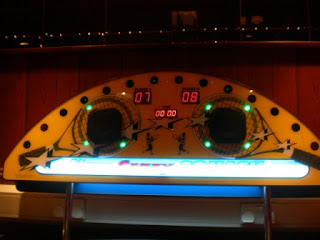 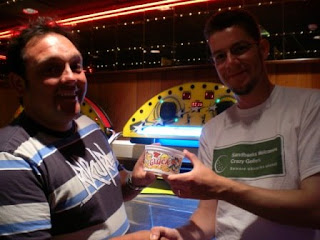 Following the four-player tournament, play took place at the original Crazy Air Squash table in The Deluxe Amusement Arcade as the originators of the sport battled to find out the winner in the ongoing Gow/Gottfried competition.