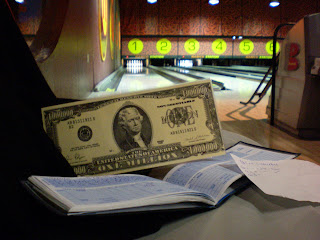 Playing six games (and a play-off) it was Mike 'Five Star' Wright who walked away with the '$1million' winnings after defeating Richard 'Bowlingo' Gottfried in the 7th game decider after both players had won three games apiece. 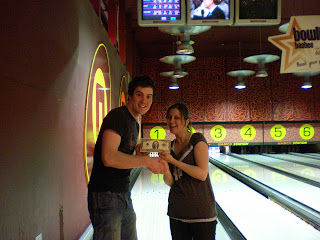 Earlier in the evening Richard had scored a new personal best on UK-soil, with a solid 158.

Emily 'EBA/MVP' Gottfried meanwhile had a bad night picking up no wins and a best score of 101 in the first game.

Next up for the Ham & Eggers Bowling Team is the Macmillan Annual Bowling Challenge 2009 later this month.
Posted by Richard Gottfried at Thursday, April 09, 2009