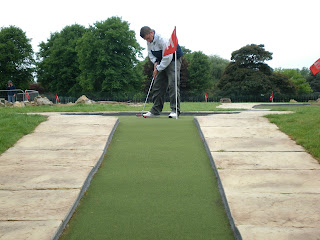 Luton Minigolfer Richard Gottfried received nominations in the category of Sports Man of the Year in the Luton Sports Network Luton Sports Awards for 2008, and finished in 4th place.

Nominees for the awards had to have met the criteria below in their 2008 season:
• Achieved outstanding performances
• Shown outstanding ability
• Shown major improvement in their sport
• Promoted sport and influenced more members of the community to take part in sport

The top three nominees were from Athletics, Boxing and Swimming.

Following Richard's win in the Manchester Mini Masters minigolf tournament in early April he is looking good for another outstanding year on the BMGA Tour.
Posted by Richard Gottfried at Monday, April 27, 2009