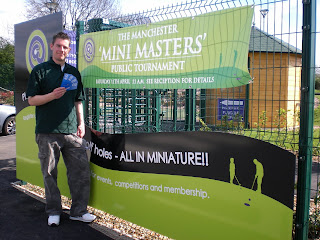 Luton’s Richard Gottfried won the inaugural Manchester Mini Masters minigolf tournament at the 9-hole Championship MiniatureGolf course @ Playgolf Manchester on Saturday 11th April. The competition was played over 27-holes and in a field of twelve players Richard won with a three round total of 81(-24) after scoring 26, 27, and 28.

In second place with a score of 86(-19) was current BMGA British Number One Chris Harding. Paul Johnson was third with 87(-18).

Richard Gottfried said “It feels great to be the Manchester Mini Masters champion and to win by five clear shots is brilliant. The course is incredibly tough with some tricky water hazards but is great fun to play, the practice I put in on the Friday paid off. I am looking forward to defending my title next year and wearing the Championship MiniatureGolf winner’s shirt with pride.”

The Manchester Mini Masters is Richard’s fourth tournament win since his British Minigolf Association (BMGA) debut in April 2007; he is also the Adventure Island/Heart FM Open Champion, Weymouth Open Champion, and one-quarter of the reigning BMGA British Club Champions. Richard is currently ranked 16th of 66 in the BMGA Order of Merit Rankings, while Emily is in 42nd place.