Results from the final week of the Putt18 World Pro League. 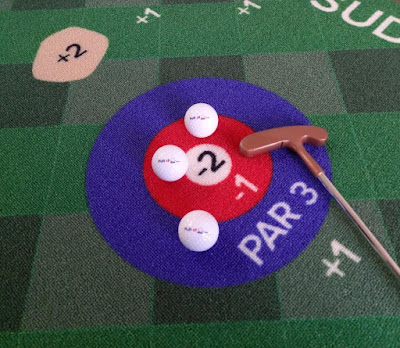 Times of the rounds:

Scores of the rounds:

I've been competing against fellow minigolf players from Australia, New Zealand and the USA in the seven event series.
Each player has a 20-minute time limit to play four 18-hole rounds for a 72-hole total score in each of the seven events. There are a variety of points on offer for low scores and total rounds.

We first played the Putt18 game format in the Putt18 Home Putting Challenge 4 Nations Cup international event against Australia, New Zealand and the USA back in May.
The Putt18 game mat consists of six tee-off boxes and three target score zones. Players must hit their balls from each of the tee boxes in turn aiming at the Par-4, Par-5 and Par-3 targets while avoiding fairways, bunkers and water hazards that carry penalty points. After the 18 shots have been played you tot up your score to see what you've shot for your round.