A visit to Southwold Putting and Cafe on the Green.

While on a trip to East Anglia in May we swung by the seaside town of Southwold and were pleasantly surprised to see the Putting course there was open. On our last visit to Southwold in May 2009 we were two days too early to play it!


The Southwold Putting & Cafe on the Green site has new operators and it looks a lot different to 2009. 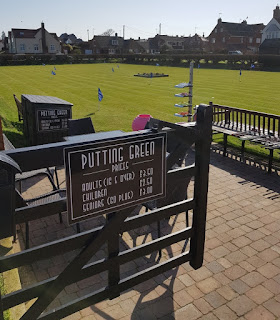 The Southwold Putting course was the 478th played and 811th visited on our Crazy World of Minigolf Tour. We're now up to 847 courses visited since September 2006.

It was really nice to have a round on the Putting course at Southwold. I managed to shoot the low round of the week and qualify for the course's end-of-season tournament too! What a nice bonus.


The end-of-season competition is taking place on Sunday 28th October. Unfortunately I won't be able to compete in the two-round tournament this time. I'd love to give the course another go though. Fingers crossed the competitors get some unseasonably nice weather for the event next weekend.

Check out Southwold Putting & Cafe on the Green on Facebook for more info.