Krazy Golf Lydney in the Forest of Dean 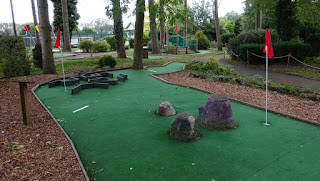 On our Gloucestershire, Worcestershire and Herefordshire road-trip we visited Krazy Golf Lydney in the Forest of Dean.


We received a very nice welcome and it was great to chat to Roger and Georgina about Krazy Golf Lydney and it's history.


The course is an interesting 15-hole layout, with a unique setting. We had a feeling the site was previously something else and this was confirmed by Roger who told us the area was once a miniature railway and model village!


Interestingly one of the holes at Lydney is based on the Wye Valle Mini Golf course at Symonds Yat West! That Roman-themed course was the 193rd we played back in August 2010.


In our match-up on the 15-hole course we tied on 38. However, as Emily scored a hole-in-one she picked up the win.


As well as the Crazy Golf course you can play Foot Pool, Air Hockey, Pool, Table Tennis and Table Football, and a selection of garden games.


Krazy Golf Lydney also has a Crazy Golf Pool table game! We hadn't seen or played one on our travels before!