Thanks to my friend, rival, sometimes team-mate and fellow minigolf traveller Paul 'Johnson Paul Johnson' Johnson for posting me a couple of the scorecards from Rainforest Adventure Golf in Dublin, Ireland. 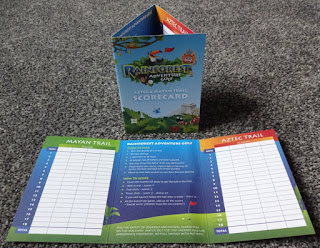 During the tournament - the first held under the auspices of the Irish Mini Golf Association and the first Irish Open held in the Republic of Ireland - the world record low score for the 'Minigolf Open Standard' (MOS) classification of minigolf was broken as Pauli Kuikka of Sweden shot a round of 23(-13) during the tournament. That official score and record followed GB's Steve 'Sheila' Lovell's world record low round of 22(-14) which was shot the previous day.


The previous best score on an Adventure Golf course was 24 - at Hastings Adventure Golf - this score remains the record low for an outdoor 'MOS' course.

The aim in any round of competition minigolf is to score as many holes-in-one as possible, with Par for each hole regarded as two shots. Many courses have their own Par system, with some holes being a Par-3, 4 or 5. The world record lowest score on a course is a perfect 18 - 18 consecutive holes-in-one!

Emily has shot a 24 in competition - at the 2011 WMF Nations Cup in Sweden - which is still a national women's record score on the Miniaturegolf format of the game. On our visit to the Crazy Golf course at Bainland Country Park in Woodhall Spa I scored a 'perfect' round of 9 holes-in-one in a row. However, there were five cups to putt into on each of the holes!


The 2017 IMGA Irish Open tournament was the third ever Irish Open and the first held in the Republic of Ireland. The first two Irish Opens were held in 2006 and 2007 at the Pirates Adventure Golf course in Dundonald, Belfast, Northern Ireland. For more information on the IMGA and WMF check out the links below.