My friend, minigolf rival, sometimes team-mate and international sporting superstar John 'Big Al' Moore was recently in Vantaa, Finland where he was competing in the 2016 European Transplant Sport Championships. In a break in his running competitions - where he won gold medals to add to his World and British titles - he managed to fit in a round of minigolf on a Swedish Felt miniature golf course near the Oulunkylä train station in Helsinki. Check out the photos of the course below. John tells me he scored a rather nifty round of 45(+9) on the layout. 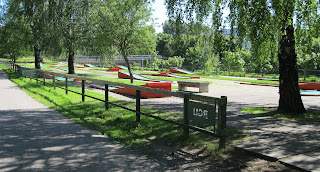 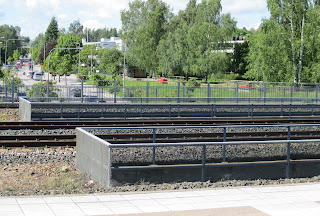 We've played a Swedish Felt course in Finland too. At the 2008 EMF Nations Cup in Tampere we had a round on the course next to the two tournament layouts.

We've also played minigolf in Sweden. But neither of those courses was of the Swedish Felt variety.

You can read a European Transplant Sport Championships interview with John on the Vantaa 2016 Games website.

John is back in action this weekend at the British Transplant Games 2016 in Liverpool. He don't half get around!
Posted by Richard Gottfried at Tuesday, July 26, 2016