As my friends, family and regular readers of the blog will know, I'm a BIG fan of minigolf merchandise and ephemera.


A classic way to encourage repeat visits in the miniature golf business is to employ a 'Lucky Last Hole' where, as a bonus, you can try and win a free game - we've played a fair few on our travels, and won on some of them.

You're very likely to find a 'Top Hole' on an Arnold Palmer Putting Course and the Free Game Cards are great. They're well made and often draw on the history of the putting franchise.

In this day and age most courses that give out free games for Lucky Last Hole wins use a paper or card based 'token', and very few still give metal coins to winners.

Except for the Lost City Adventure Golf course in Nottingham. If you're skilled - and lucky - enough you might just win a piece of treasured Inca Gold!

The Lost City Adventure Golf's Temple Trail and Sacred Skull Pass courses were the 330th and 331st we played on the Crazy World of Minigolf Tour. The 36-hole indoor layout has two Lucky Last Holes - both are actually the 18th hole of the course, rather than standalone holes.

When we've played as members of the general public we've not been able to master the lucky last holes at Nottingham, and when we've played there in national tour competitions we've only used one course and skipped the 18th, replaying the 1st hole instead. So unfortunately we've never won a free game there.


But the team at the Lost City were kind enough to send me a nice package that contained a branded pen and two magnificent tokens in a cardboard slip case. Fantastic additions to my collection.

What's more, the Lost City Adventure Golf also has it's own handstamp applied to its mail! Absolutely brilliant to see. There aren't nearly enough minigolf stamps, postmarks or handstamps in circulation. 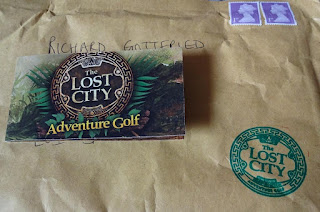 The Lost City Adventure Golf have really gone to town on their branding - on our travels to 675 courses it's the only place we've seen with an Adventure Golf table! Marvellous.

You can also now sign-up to receive our miniature golf newsletter.
Posted by Richard Gottfried at Saturday, April 16, 2016

Seriously jealous! Love the carded pair :))
You're absolutely right re advertising Squire Squire.
I could see some of that loot on ebay in the near future or I hope I do....
Ace

I love the branded table. Can't beat a well made bit of furniture. Especially when it's minigolf-related.