Backing a Kickstarter campaign for the latest addition to the Zombies!!! board game series. 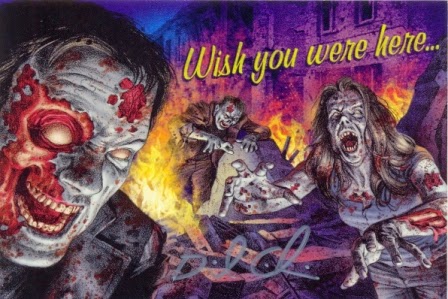 Earlier this year I spotted that the team at Twilight Creations were launching a Kickstarter campaign for the latest addition to the post-apocalyptic survival horror game series and knew I had to chip in to the funding.

I'm a big fan of games, horror and zombies and while playing many of the editions and expansions of the Zombies!!! and Humans!!! games I'd noticed that the ruined cityscapes and environments in the Zombies!!! universe were lacking something that many towns and cities have.

You guessed it - a miniature golf course!

I was one of fifteen Tile Designers who backed the project and so now 'Squires Minigolf' is a playable part of the game!


Zombies!!! 13: DEFCON Z sees the military, the CDC and others begin the fightback against the zombie menace and takes place in the years after the original outbreak caused the end of the world as we know it!

The Zombies!!! games are very high quality - with great artwork on the event cards and game board tiles. There are also quite a few different types of zombie figures to kill (or avoid) in the game's universe - including humans, clowns, military enhanced zombies and zombie zoo animals!


Zombies!!! 13: DEFCON Z is a standalone expansion can be played in combination with Zombies!!! or in its own right. The set includes 25 map tiles (including the Minigolf course), 50 event cards, heart, bullet and new 'infection' tokens, dice, new player figures and 100 Zombies in four new poses.

Check out the Twilight Creations website for more details and stockists of the Zombies!!! games and expansions, as well as other board and card games they make.

Back in 2011 we played in a Zombie Apocalypse outdoor laser tag event in Hastings. We were told that our group were the worst to ever play and so in the event of a Zombie Apocalypse we can all now rest easy in the knowledge that we would make better Zombies than survivors.

This year World Zombie Day is scheduled for Saturday 11 October!