Report, photos and video from the 2013 Worlds Crazy Air Hockey Championship in Hastings.


When Crazy Golfers are not Crazy Golfing they can often be found lurking and loitering in the warmth of an Amusement Arcade.

In a tradition stretching back to 2010 minigolfers have enjoyed playing the game of Air Hockey and the 2013 championship promised lots of action and excitement. It certainly didn't disappoint.

With a densely packed, competitive and eager field of 30 athletes lined-up it was down to the very busy Buttons Committee to do the draw to see who would face-off in the contest to win the £1 sterling prize money, and most importantly the title of "Best Air Hockey Playing Crazy Golfer in Hastings at the End of October".

After what seemed like hours of play, especially as the tournament was preceded by the Worlds Tat Challenge, the final came down to a battle between two English competitors as Martin Greenhead faced off with Chris Harding.

Video of the final.

In the most thrilling and most controversial match former Worlds Champion Peter Jones faced Terry Exall.


The match finished with a win to Exall, and utter disgust from Jones who threw his paddle across the table and into the path of Terry who recoiled in fear, only to be saved by the net!

In the immediate aftermath of the hot-blooded match Jones was heard to say the table robbed him of the win claiming "You can get better Air Hockey tables from Argos. The air flow on the table in that match was terrible."

Terry, ever gracious in victory, merely said at the the end of the competition "I didn't care about winning the whole thing, as long as I didn't lose to Peter Jones."

The event was a true one and is unlikely to be repeated.

Until next year that is when it'll take place at the same sort of time in the same place. Unless Peter Jones'ses'es behaviour has seen us all banned from the Old Town Buttons.

Until next time. Peace. 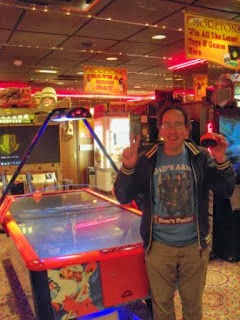