Our “Wildcard” team from San Marino finish 4th!
On Thursday 9th August Emily and I headed to the Knight’s Templar Pub on Chancery Lane in London as it was the host venue for the 2012 International Rock Paper Scissors Championships organised by the team at Wacky Nation!
We’ve competed in the 2010 and 2011 UK Rock Paper Scissors Championships and the event is always a great sporting and drinking occasion.
With over 150 athletes in 16 teams representing a range of countries including Lapland, Austria, Japan and Great Britain, Emily and I teamed-up with fellow ‘wildcards’ Dave and Sophie Barry from the USA. As we couldn’t play as a combined "UK-USA" team we decided to represent San Marino!
﻿
﻿
The Wacky Nation Rock Paper Scissors Championships attract a great deal of media attention and BBC 2’s James May and his Man Lab team had enlisted the help of 2011 UK RPS Champion Max Deeley. For some reason their team also included football hardman Neil ‘Razor’ Ruddock!
Prior to the start of the competition I challenged ‘Razor’ to a friendly RPS contested to warm-up. Needless to say I won the one-throw shootout! It was an ill-tempered clash with plenty of foul language, gamesmanship and it almost resulted in a knock-out punch!

With the main event drawing ever closer the teams were divided into two pools and commenced with a series of Round Robin matches. Our team of Sammarinese players were in a division that also consisted of Lapland A, Austria, Japan, South Sudan and Somalia. Having had a few practice games within our team in order to get our throws right (throwing on two, not three pumps) we set out on our road to the knockout rounds.
Matches were played in a ‘first to four points’ format with each player in the team taking it in turns to win a point by competing in a ‘best of three’ Rock Paper Scissors game. Our team managed to rack up win loss record of won four, lost one to have one-foot in the finals. However before any teams could advance from our pool a play-off was required as Austria and Lapland A had also finished with four wins and one loss!
A play-off was required and thankfully our team were able to win both of our matches to advance alongside Lapland A, with the Austrians unfortunately sent home.
Reaching the semi-finals of the International Rock Paper Scissors Championships was the furthest stage of an RPS contest I’ve ever reached having been knocked out in the preliminaries in 2010 and 2011. Dave and Sophie’s play was very impressive and were on fire in their tournament debuts. Emily has reached the higher levels of competition and so had some experience to bring to the team.
The first semi-final saw San Marino take on the Vatican City team in a ‘first to six points’ match. Unfortunately we lost and were therefore unable to go for gold and would have a chance for the bronze in the repechage. Lapland A picked up a victory over Great Britain to reach the final and the veteran team, also known as The Richard Richard Danes Appreciation Society, would face the Vatican City.

Before the final the bronze medal play-off was played between San Marino and Great Britain. The opening stages of the match echoed the famous fast goal by footballer Davide Gualtieri of San Marino against England in 1993. Much like that match the scoreline was one-sided and the result meant San Marino didn’t win. 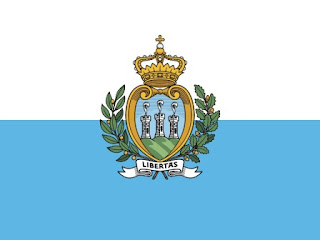 Looking back at the 2012 International Rock Paper Scissors Championships in London.

We competed in the International Rock Paper Scissors Championships in London eight years ago this week. Time flies.