On Saturday 23rd January Richard Gottfried was unable to make it three Scrap Iron wins in a row as he lost the intra-team Scrap Iron Cup competition played between members of the Midlands Minigolf Club at Adventure Island Mini Golf course at Star City, Birmingham.

Richard won through to the final after a first qualifying round score of 21(-1) over the front 11 holes on the Lost Hut Trail course.

Birmingham youngster Owen ‘Jackpot’ Johnson was the other player to make the cut, scoring 22(par) and two shots ahead of Welsh ladies number one Cindy Kukielka who scored 24(+2) to finish in third place overall.

In the 7-hole Matchplay Match final round Owen won one-up, having led from the first hole until Richard was able to make the match all square at the 6th, only for Owen to score a two, to Richard’s three, on the final hole to seal his first big minigolf victory and return the prestigious Scrap Iron Cup to the Black Country. 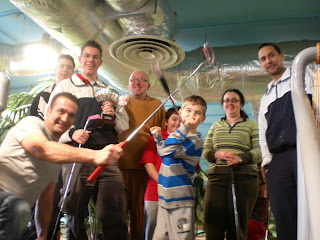 Rules of the Scrap Iron Cup
Played between members of the Midlands Minigolf Club
Played in either groups of two, or one group, in round one
Groups are drawn at random using the 'balls in a hat' technique
Round one is a strokeplay match played over 9, 11, 12 or 18 holes
The two players with the top scores after round one qualify for the second round/final
Round two is a matchplay match played over 7, 9, 12 or 18 holes
The winner of the matchplay match becomes the Scrap Iron Cup* Champion**