Luton Minigolfer Richard Gottfried picked up his tenth top 10 finish of the season as he finished in 8th spot of 24 players in the season closing Kent Open in Margate on Sunday 1st November. 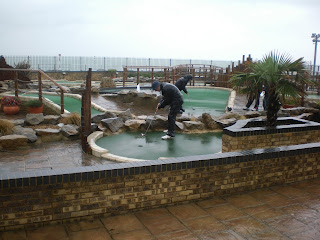 The tournament was won following a play-off by London’s Nick Chitty with a score of 108 (par).

Richard said “Despite the terrible weather I managed to put together some good rounds. Last year I was 13th here so to get 8th place and another top ten finish is great.”

The new BMGA Season begins in January 2010 when Richard will be competing in the BMGA National Open at Star City, Birmingham.