Minigolfers Richard & Emily Gottfried travelled to Stratford Upon Avon on Sunday 17th May to compete in the Midlands Invitational Tournament (MIT). Played over 36 holes at the 18-hole Recreation Ground course, Richard finished in 5th place and Emily 7th in the 14 strong field. The MIT was won by Bath’s Kevin Moseley with a two round score of 64 (-8).

Richard said “I was pleased with fifth spot and just wish I had hit a few more holes-in-one. The Stratford course is one of the finest in the country and the difference between an ace and a two on most holes is marginal and can be a big difference maker in the competition.”

Heading into the second round Emily was in fifth spot but a few costly fours negated her excellent eight holes-in-one.

Emily said “I had quite a random day, jumping from fours to aces, and although eight aces over two rounds is an excellent total for me, it’s a shame I wasted them by missing some other easy shots.”

In June Richard & Emily will be playing in the BMGA British Doubles taking place in Boscombe. After the main MIT competition Richard and playing partner Kevin Moseley got some practice in picking up a victory in a Doubles Matchplay match, defeating the duo of Jam Trubridge and Peter Jones 4 & 2. 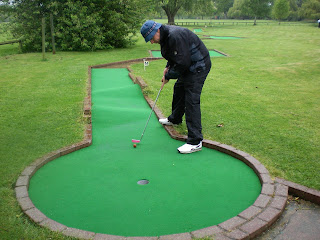