The Dull Men's Club Self-Isolators of the Year Award

We have been declared the Self-Isolators of the Year by the Dull Men's Club for the way we have continued to explore, promote and enjoy our minigolf hobby during the pandemic and subsequent lockdowns. 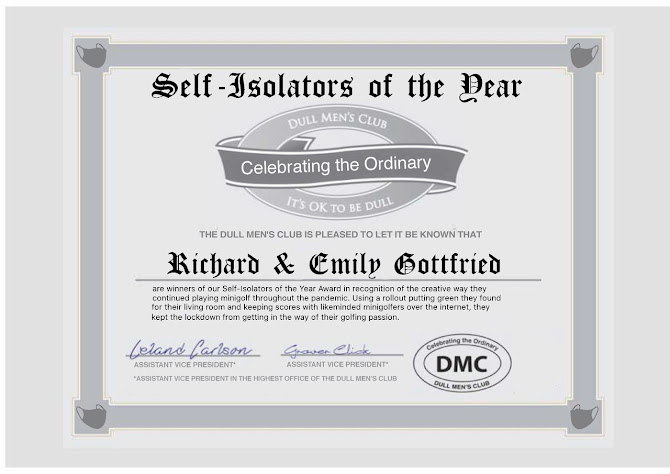 In recent years the Dull Men's Club has presented an 'Anorak of the Year' award. For 2018 it was presented to Kevin Beresford from Redditch, founder of the Roundabout Appreciation Society. For 2019 to Archie Workman, a drainspotter in Cumbria.
Leland Carlson, Assistant Vice President of the Dull Men's Club said "Normally the Dull Men's Club would have awarded the Dull Man of the Year Award in person, but coronavirus has put a stop to our ability to meet up and discuss the merits of our member's interests and present the award. At the last event in Manchester in November 2019 we awarded Archie Workman the Dull Man of the Year Award for his services to the world of Drain Spotting."
Leland continued "2020 was certainly a different year to most and it's unfortunate that the wide-range of people who make up our club haven't been able to get together in person. We've had a lot of conversations and meetings online and found that members of the club have adapted remarkably well to life indoors. Many of the hobbies and pastimes we practise are perfect for whiling away the hours, days, weeks and months of a lockdown."
"Richard and Emily are long-standing members of the club and always supportive of our events and the interests of fellow Dull people. While on the surface minigolf is not the dullest of activities and many would argue it is far more flashy than its 'big' brother Golf, there are plenty of rabbit holes to head down to research, explore and archive in the mini game. Dullness is a spectrum and everyone's hobby or interest has a place on it."
We appear in the 2021 edition of the Dull Men's Club Calendar along with a number of other characters each with their own 'dull' pursuit.
It was fun to be included in the Dull Men's Club Calendar again this year after debuting in the 2017 edition. To have been presented with the Self-Isolators of the Year Award is a fine accomplishment.
Our Crazy World of Minigolf Tour and obsession with the game does cause mixed opinions - some people find our fascination with all things related to miniature golf over-the-top to the point of dullness.
I have given presentations on the history of minigolf at a number of Dull Men's Club events and always get good feedback. Perhaps it's a nice palate cleanser on the agenda in-between talks about such things as roundabouts, telegraph poles, postcards, cacti, drains, lawnmowers, giant vegetables and valve radios. I'm certainly looking forward to the time when we're able to meet up in person again to hear about other people's hobbies and interests and also what they've been up to during lockdown.
Minigolfing activities we have been involved in during the last year have included:
When the first lockdown started we did wonder when we'd be able to play minigolf again, but as we're always keen to be active in minigolf projects we've managed to find lots to do.
We have now visited 957 minigolf courses around the world since 2006, with 918 of them in the British Isles. In recent years before the pandemic we had visited around 60-80 new courses per year. We got off to a tremendous start to 2020 and visited 20 courses in the first 20 days of the year. But by the end of the year we had only been able to get to a total of 46.

Find out more on the Dull Men's Club website.

The Dull Men's Club 2021 Calendar is available from Amazon.