The worst Christmas trees of 2016

A fine selection of the bad and ugly Christmas trees spotted this festive season.


During the festive season I've been engaged in discussion and competition with Marc Bazeley and Dan Paynton as to who has seen the worst Christmas Tree on their travels.


Among the dregs and dross of what passes for seasonal decorations we've noticed some common themes, most notably the erection of metal railings imprisoning the tree. Some of these barricades have also carried signs bearing that most traditional of greetings 'WARNING DANGER OF DEATH'. And while we may scoff at that message, at least the trees seen with that sign have at least had lights put on them!

So, after not much consideration our top three worst Christmas Trees of 2016 are as follows

In Chorley Marc found this delight.


In Chale, near Ventnor on the Isle of Wight Dan snapped this beauty.


Dan quite liked the look of this sorry affair I spotted in Cheadle Hulme's Oak Meadow.

Not a bad tree per se, but while in Bolton I had to frame the photo like this to make it as ludicrous as possible.


And speaking of ludicrous I have no idea what was going on with this 'tree' in Stockport!


A selection of the others spotted by members of the newly formed Awful Tree Spotters (ATS) club.

Emily spotted a couple of Christmas trees while in Vienna, Austria. However they don't count as they're actually nice.


And while it's not a Christmas tree I'd like to finish this post with this lonesome decoration on the seafront in Felixstowe. 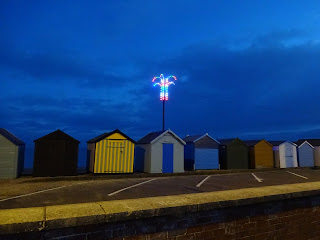